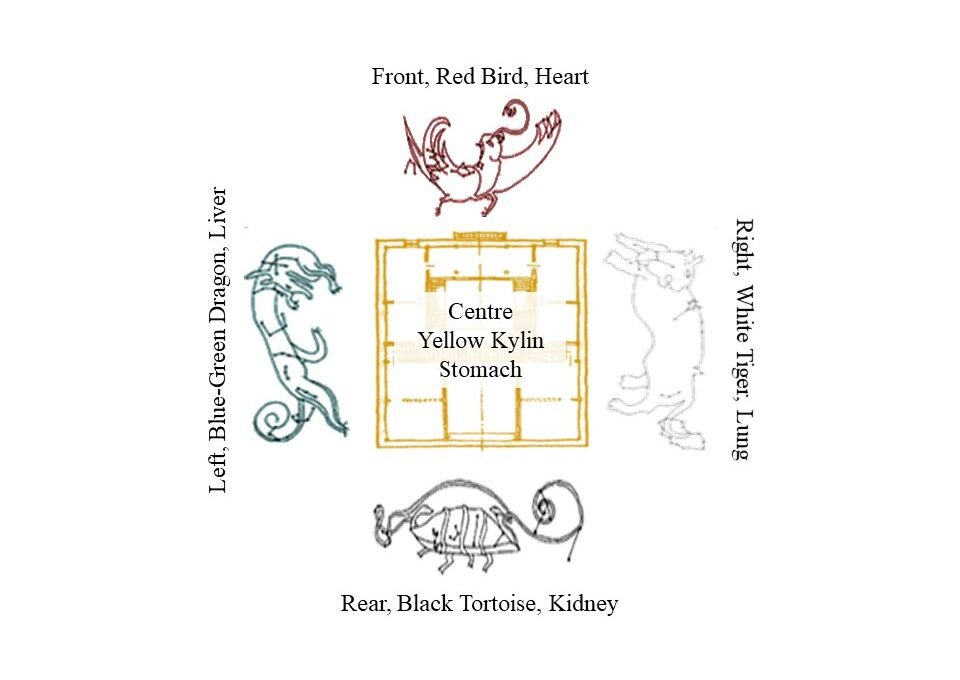 How does Feng Shui view health in the home?  There are many different methods, some more complex, others very simple, some ancient, and some more modern interpretations.   Master Tyler J. Rowe explains.

Feng Shui and Chinese medicine share many common theories – Ch’i (Qi) ‘Energy’, Yin and Yang ‘Positive and Negative’ and the Five Elements to name a few.  These concepts link the different philosophies through a system of correspondences.

They can be used to find correlations between the home and the health of its residents.  A simple and ancient method looks at the exterior Forms and relates them to different organs of the body.  In essence, ‘the body as landscape’.

Firstly, what are the exterior Forms?  They are the landforms surrounding a home – hills, water, trees, and even other buildings.  The oldest Feng Shui method involved the visual analysis of the shapes made by these Forms and how they relate to a dwelling.  Certain arrangements of Forms are considered auspicious in some locations and inauspicious in others.  The land at the front, back, left and right of the home is classified according to five mythical animals drawn from Chinese astronomy – respectively, the Red Bird, Black Tortoise, Blue-Green Dragon, White Tiger and Yellow Kylin.  Each of these has good and bad characteristics that could affect the luck of the home and its occupants.

Firstly, the Red Bird, the land in front of the home.

Ancient Feng Shui wisdom tells us that the Red Bird, the Fire element, is auspicious if it has movement, and is inauspicious if it does not.  Traditionally it was best to face water, this brings in good Qi and benefits the whole home.  Moving water is best, stagnant is not so good.

In the body the Red Bird is represented by the Heart.  In Chinese Medicine it is said that the Heart is the Emperor of the organs, it generates blood and governs the vessels.  Illnesses of the Heart include heat, insomnia, anxiety, palpitations, sores and itching.

Having a high fence or steep slope up from the front of the home obstructs the Red Bird, making it stagnant, without movement.  This does not mean it will cause an illness of the Heart but might not help a pre-existing condition.  The opposite can be said to adding a water feature to the front of the home.  It wouldn’t prevent or alleviate an illness of the Heart, but it could help.

For example, a water fall and pond would create a peaceful and calm view upon entering the home, hiding behind a high wall would only fuel anxieties.

Second, the Black Tortoise, the land behind the home.

The Tortoise, the Water element, should form a kind of screen at the back of the home, a foundation to the site.  It is auspicious if it gently inclines down toward the home, it is inauspicious if it is too steep.

If the back of the home is open, it is like sitting with your back to an open doorway, cold will get in and chill the spine.

Next, the Blue-Green Dragon, the land to the left.

The Dragon, the Wood element, should form the left arm of the ‘surrounding embrace’ configuration.  This ‘armchair arrangement’ (which includes the Tortoise and the Tiger) provides support to the whole site.  It is auspicious if the Dragon is undulating and continuous, it is inauspicious if it is too high toward the front.

The Liver is considered the Blue-Green Dragon of the body.  Chinese Medicine says that the Liver is the General in charge of planning and generates the sinews.  Liver illnesses include anger, wind, dizziness, and rigidity.

Classically the Blue-Green Dragon would have been a line of rolling hills, getting higher toward the rear.  Nowadays this could be a fence or a dense line of trees.  If this is missing sections, entirely absent, or taller at the front, this would indicate a higher than likely chance of aggravating Liver illnesses.  A solid Green-Dragon would help remedy such a situation.

And then, the White Tiger, the land to the right.

The White Tiger of the body is the Lungs.  According to Chinese Medicine, the Lungs are the Prime Minister regulating and controlling as well as generating skin and hair.  Lung illnesses include sadness, dryness, and cough.

The White Tiger, Yin, balances the Blue-Green Dragon, Yang.  Like the Green-Dragon, in the past it would have been a line of rolling hills, getting higher toward the rear, but overall not as tall as the Blue-Green Dragon.  Again, nowadays this could be a fence or a dense line of trees.  If this is missing sections, entirely absent or taller at the front, this would indicate a higher than likely chance of aggravating Lung illnesses.  A solid White Tiger would help remedy such a situation.

In the instance of an absent border on the left or the right, the site is left exposed making it difficult to maintain a harmonious environment within, temperatures fluctuate, emotions can too.

Finally, at the centre of all this, the Yellow Kylin.

The position of the home at the centre is associated with the Earth element and the Kylin (Qilin), sometimes called the Chinese unicorn. This is actually a combination of a number of other animals, a kind of Chimera.  It is at the junction of the four other animal signs.

The centre of the body in Chinese Medicine is the Stomach.  The Stomach is the granary storehouse, the five flavours come from here, it generates the flesh.  Illnesses of the Stomach include worry, damp, swelling and fullness.

The dwelling, located within the Forms, is at a place the ancients called the ‘Point’.  This is the same term used for an Acupuncture point in Chinese Medicine.  If the surrounds are correctly located and positioned, the Point is auspicious.  However, the home that sits upon it must be auspiciously constructed also.  It is useless to have the surrounds correctly located and proportioned if the structure at the centre is poorly made.  This is the equivalent of feeding the stomach only junk food and expecting it to provide healthy nutrients to the rest of the body from this.

There are many factors that go into an auspiciously constructed home, but perhaps the most important is that it is well contained to prevent leakage of Qi.  The Earth element is associated with the square and a four-sided home is the most stable shape.  L-shaped and U-shaped houses should have the missing sections ‘filled in’ to complete a square or rectangular floor plan and help cultivate Qi.  This could be a major renovation adding more interior space, or as simple as building outdoor structures like an alfresco / covered deck to fill the missing portion.

To again use the stomach as an analogy, a missing corner is like missing an important food group, some part of the whole will break down eventually.