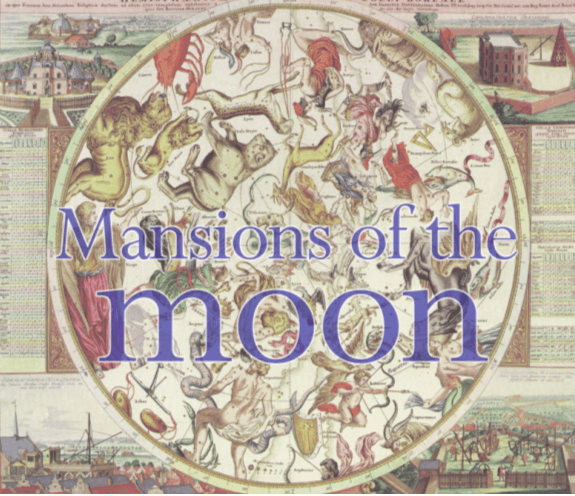 The outer ring of the traditional Chinese feng shui compass (the lo p’an) reveals the 28 hsiu usually translated as the ‘lunar mansions’. The vision was that the moon travelled across  areas of the sky called ‘mansions’.

These are groups of stars, or constellations, which lie, more or less, along the path travelled by the moon during its monthly round. The fact that these star patterns vary considerably in size is the explanation for the most obvious peculiarity in the layout of this outer ring of the compass. Usually, instead of being evenly spaced, the 28 divisions are very unequal, varying from about 33 degrees extension (or width) to less than one degree. This was not always the case.

During the first few centuries of this era, on the lo p’an’s ancestor, the divining plate, the lunar mansions were indeed regularly spaced round the rims of the circular ‘Heaven’ plate and the square ‘Earth’ plate in which the Heaven plate rotated, since the divining plate had an entirely different function to the lo p’an of later centuries. These were multi-purpose instruments, and the outer rim of 28 mansions had a very important practical significance.

It is well-known that the Chinese calendar, like the Jewish, Islamic and many other calendars based on the phases of the moon, had a year of variable length. Since each month begins with a New Moon, and the time between one New Moon and the next is about 29.5 days, it means that the ‘lunar’ year is about ten days shorter than a year based on the length of time it takes the earth to travel round the sun – the ‘solar’ year. After three years, the lunar calendar would be more than a month out of step with the seasons, and astronomers would find it difficult to predict even such simple phenomena as the solstices or equinoxes, let alone such important data as eclipses or planetary positions. The true data could be ascertained from the position of the stars in the sky if only it were possible to see the stars during the day!

The Calendar on the Compass

This is where the outer ring of the lo p’an comes into play. It is a basic rule of astronomy that at Full Moon, the sun is always on the opposite side of the sky to the  moon. Thus, by noting the position of the Full Moon in the sky, and seeing which lunar mansion it occupied, the position of the sun could be found quite easily by looking at the lo p’an and seeing which constellation lay opposite. If for example the Full Moon was seen in the constellation Hsu (the Void) then the sun would be in the opposite constellation Hsing, (the Star), and from this fact the astronomers and calendar makers would know that from then on the days would begin to get shorter.

The irregularity in the sizes of the constellations reveals that the principle of dividing the heavens into 28 divisions, like the segment of a  grapefruit, wasn’t a single inspired notion, but a feature which evolved over centuries – or rather, as is more likely, over thousands of years of patient sky watching.

In the western world, while writing may well have been invented by accountants and scribes for compiling their inventories of goods, in China, the invention of writing is due to the astronomers of old, who kept meticulous records of their star observations. Even today, there are several Chinese characters which come directly from star patterns. Shen, meaning ginseng, is derived from a diagram of the stars of Orion. The constellation looks like a human figure, as does the root of the ginseng plant. Likewise, the Chinese character for ‘ill-fortune’ Xiong is derived from a sketch of four stars containing the nebula Praesepe.

This constellation was known as the ‘Ghostly Carriage’, which carried the souls of the dead to the next world. There is a reference to this lunar mansion in the I Ching (a Chinese book of divination) in the text to the top line of hexagram 38.

The ancients divided the sky into four quarters, one for each season, the Eastern quarter being equated with the ‘Green Dragon’, the South the ‘Red Bird’, the West the ‘White Tiger’, and the North the ‘Black Tortoise’. In later astronomical writings, the Northern quarter became known as the ‘Dark Warrior’, as the word ‘tortoise’ was sometimes considered a term of abuse.

As well as being divided into four quarters, the horizon was sliced into 365.25 degrees, one for each day of the solar year. The starting point was the star Spica, a bright star which can be found easily by following the tail of the constellations the ‘Great Bear’. Being in the quarter of the sky known as the ‘Green Dragon’, this star became known as the ‘Dragon’s Horn’. As the study of astronomy in China developed, and more constellations were identified by names, some semblance of regularity was introduced by dividing each of the quarters of the heavens into seven ‘mansions’.

Because many of these mansions had already been given traditional names, some newly named constellations had to be squeezed in. For example, Orion’s head was chopped off to form the constellation of the ‘Turtle’s Beak’, which may be why this particular pair of lunar mansions is associated with executions and ill-fortune.

After the ‘Dragon’s Horn’, the second lunar mansion is the ‘Dragon’s Neck‘. It is mentioned in the opening text of the I Ching. Translators of the I Ching ­– even Chinese commentators – who have been unaware of the significance of the ‘Dragon’s Neck’ get themselves into an awful stew trying to translate the four characters which signify ‘In the Dragon’s Neck there was an Eclipse’. If you have a version of the I Ching, check what the translator makes of the text for the top line of the first hexagram.

Although the ‘Dragon’s Horn’ marks the starting point of the Chinese celestial road, the four quarters themselves relate to the four cardinal points by way of their central mansions. Thus, the mansion at the south point of the lo p’an is the central mansions of the ‘Red Bird’ quarter called, appropriately, ‘The Bird Star’. In that part of the sky

which was directly opposite, however, no stars were apparent, which is why the central mansion of the ‘Black Tortoise’ is called the Void – meaning an empty space void of stars, and consequently considered to be an ill omen.

The central mansion of the ‘White Tiger’ is the Pleiades, but the adjoining mansion is ‘The Stomach’. In ancient times, perhaps a thousand years BC at the latest, the ‘Tiger’s Stomach’ would have been the central point of the western quarter, but by the first century BC, the movement of the precession of the equinoxes made it necessary to allocate a new constellation to mark the autumnal equinox. For similar reasons, it is the mansion of the ‘Room’, and not the ‘Dragon’s Heart’, which from the first century onwards indicated the centre of the eastern quarter of the Heavens.

Another apparent reference to the I Ching may merely be coincidence: the largest of the lunar mansions, number 22, the ‘Well’, has the same name as hexagram 48 but I do not find anything in the text which suggests an astronomical connection. The constellation is so-called because the pattern of its stars resembles the Chinese character Jing, meaning a Well.

The whole spectrum of the 28 mansions is best seen in the diagram which gives the names of each of the mansions and the quarters of the sky to which they relate. The diagram also gives a rough indication of the wide variation in the sizes of the segment angles. Usually, on the lo p’an, the names of the smallest mansions, exaggerated here, have to be omitted since there is not enough space to accommodate them. 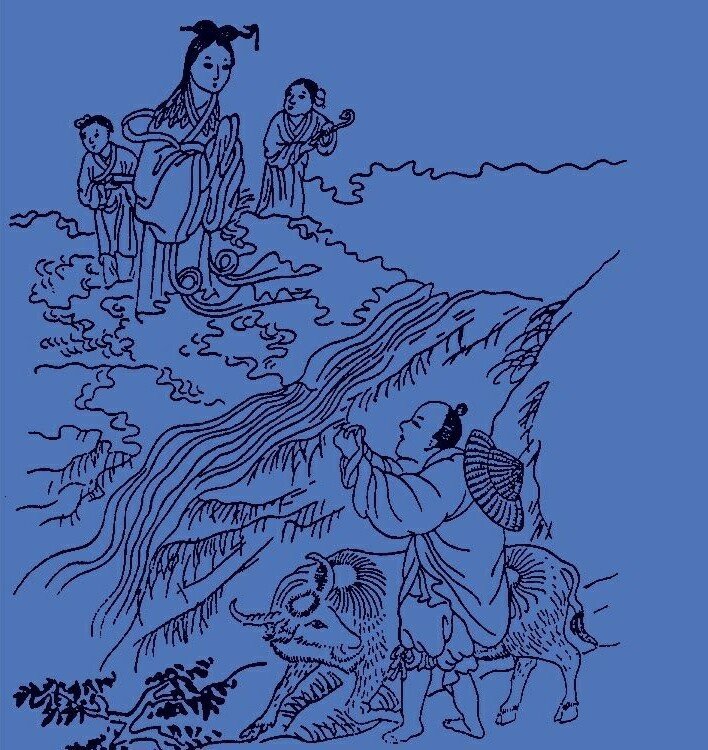 The Ox-boy and the Weaving Maid

The extreme antiquity of the names of the constellations is revealed by the charming legend of the Ox-boy and the weaving Maid. His job was to look after the celestial herds, and hers was to weave clothes for the gods. But they were so much in love, that they both neglected their duties, and the gods had no milk to drink, nor clothes to wear. As a punishment, the two lovers were separated for ever, with the ‘River Han’, the Milky Way, running between them. But out of compassion, once a year the lovers were allowed to meet, crossing the ‘River Han’ by a bridge built by magpies.

What is curious about this legend is its reference to the stars, the Weaving Maid and the Ox-boy, which align with a pair of constellations known as the ‘Ox’ and the ‘Loom’. But strangely, the two stars are not aligned with their own constellations, but the constellation which might more properly be teamed with the other partner. However, if one travels back far enough in time, because of the astronomical phenomenon known as the precession of the equinoxes, the two stars can be seen to have shifted their positions in relation to the respective constellations. This dates the legend of the ‘Ox-boy and Weaving Maid’, and the names of their stars and constellations, to the time when Stonehenge was being built, and before the invention of writing in China.

Derek Walters is an authority on Chinese traditional culture and is the author of several books on Chinese astrology, feng shui and other aspects of Chinese philosophy. He makes frequent visits to the Far East and is a member of the Scientific Organizing Committee for the international symposia on Chinese Astronomy and Traditional Culture at the Purple Mountain University, Nanjing, as well as being an honorary member of the society of Diviners, Hong Kong. Although officially retired, Derek still lectures regularly in Germany, and has inaugurated courses in Russia and the post-Soviet states.