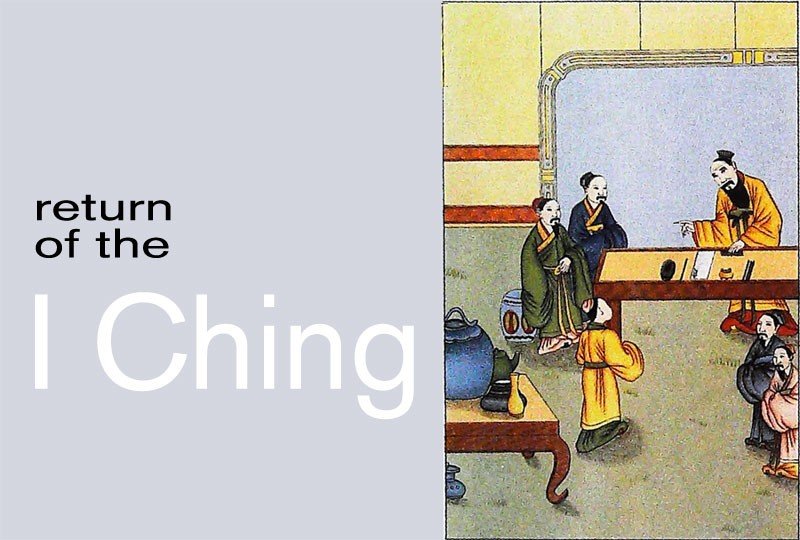 A New Way of Looking at one of the Oldest Books In the World is Inspiring Beginners to pick up the I Ching. Nadia Raafat Reports …

[dropcap]Y[/dropcap]ou have visions as to what somebody should look like with 30 generations of I Ching prophesying in their blood. Should they have a long beard flowing to the ground, or be the spitting image of Lao Tzu? I looked for a flash of the divine in the dark narrow eyes of the person standing in front of me. There is nothing there. Just a slip of a man in a Chinese white silk suit who laughingly assures me he is ‘quite ordinary’.

Master Shao Aidong can trace his family tradition back over 1000 years. A millennium ago, the study of the I Ching was at its height and one of Master Shao’s ancestors, Master Shao Kangjie, founded the famous Meihua yi Shu (the way of changes and calculations from the plum blossom tree).

Skip one thousand years to this century. Master Shao’s father, the Great Master Shao Weihua, writes a book on the prophecies of the I Ching. Published in 1990, it has a circulation in China second only to the works of Chairman Mao.

Now his father is dead and it’s up to Master Shao to continue on the tradition. The young 35- year-old seems to be doing it. Besides gaining world-wide acclaim as one of the few living experts on the I Ching, Master Shao has been awarded the Ambassador of World Peace and Culture by the US World Peace Organisation for his work on trying to bring the benefits of the I Ching to all people.

The I Ching is one of the oldest books in the world and estimates place parts of it at between 3000 and 3,500 years old. Originally conceived of as a means of communication with the gods and spirits that wandered the earth, the I Ching went on to take the starring role in all subsequent Chinese productions, from the philosophy of Taoism to Chinese traditional medicine and from martial arts to feng shui.

Emperors, heads-of-state, Chairman Mao, scholars, Confucius, and soldiers, not to mention street -corner diviners – they have all read the I Ching. You’ll find that its images and ideas have been reincarnated again and again in poetry, philosophy, literature and art of China.

“This is the first time Westerners are ready to learn in the manner that is required.”

During the Cultural Revolution in China, the thought of having to burn the I Ching reduced tough, secular communist soldiers to quivering superstitious wrecks. It was only one of the few ancient texts to escape unscathed from the original Burning of the Books. The effect it has , had on Chinese cultural history – and is still having now as China begins to shrug off its recent history – is nothing short of profound.

The name of the course Master Shao and Master Wang Hong (Master Shao’s wife and an I Ching master in her own right) teach is The I Ching and the Art of Feng Shui. Forming part of a professional training program, their course covers the basic elements of the I Ching, Five Elements, Hexagram Prediction and Feng Shui. Feng shui is a branch of the I Ching, or at least intrinsically related, because they both concern the individual (ming) within the environment (feng shui).

“Human beings need somewhere to live, we have found that the environment affects the person’s life. If you know your ming (your blueprint), the fixed information about you that is nchangeable, you can choose the feng shui, you can’t choose the birth date,” says MasterShao.

He adds that if the house is providing a service for the people living there, where it is located and how it is structured should be decided based on knowledge of the people concerned. In an ideal world, first you establish the ming, and then you do the feng shui.

The I Ching is not the easiest text to learn to read. It consists of 64 divinatory figures. Each of the figures comprises a six line graph called a hexagram which itself is made up of two three line graphs known as trig rams (kua).

Accompanying each hexagram are short oracular words and phrases which define the various meanings of the hexagram, its two trigrams and each of its six lines.The single lines that make up the trigrams and hexagrams represent the primal powers that form the world, the opposing yet interrelated cosmic forces of yin/yang, the theory at the epicentre of the Chinese world view.

There are three different kinds of lines, one whole or continuous (yang) and the other broken, or opened (yin). The third type of line is the transforming line – yang to yin or vice versa. This third line opens up the dual aspect of the lines and also represents the essential idea of unceasing movement and change that is at the heart of yin-yang theory.

Confused? No one ever said the I Ching was a light read

Think of it as an active dictionary. Each of the 64 divinatory figures are like dynamic centres of information comprising layers of meaning; words, ideas, images and lines interacting and building the overall picture the diviner sees. Sixty four possible options for change, hence the name I Ching or Classic of Changes.

But it is a certain kind of change that this book refers to, the change that is out of the ordinary, the life-transforming change. What the I Ching will tell you is how to handle the present and near future – whether to fight it, or be fluid, whether to be moved and changed by the hidden spirits or whether to sit still and wait. In other words, the oracle will bring you intuitive clarity, or bright spirit what the old shamans called shen mingo

What do you think and feel about the issue now? Who is involved? What is at stake? What do you want to know? Once you have clarified these finer points of the issue, then formulate the question. The clearer you make the question, the clearer your answer will be. “This is your time to connect with the spirits,” says Master Wang. “It is most important that you sincerely ask the question, if you want it to work.”

When you’re ready, take three coins, and imagine putting your information into the coins as you shake them very hard so that you ‘wake up the spirits’. Then you throw three coins six times, or (in the old days) count out and divide 50 yarrow-stalks to arrive at one of the 64 hexagrams.

It is possible to consult the I Ching yourself.  I have, three times now. Once for myself, the other two times for friends. Two out of three times, the answer was spine-chillingly relevant. The third was off the wall. As an amateur, however, you will miss most of the information that a trained diviner will read. As mentioned, this is a complicated text. Master Shao has been studying the I Ching since he was 12 years of age.

On being a good Master, he says, “First, you need to accumulate enormous knowledge to understand the relationship of the trigrams and lines to each other and the second step is that you definitely need to have inspiration to connect to the spirit.”

Master Wang who, incidentally met her husband through the I Ching, describes her role in the divinatory process as being that of translator – the person who puts all this knowledge into information the layman can understand. “It is the second important step of the reading. If the Master is no good, the translation will be wrong and you may not get the true meaning. “

The answer comes through what your conscious mind perceives as chance. In relinquishing the answer to chance, you let something else do the choosing. That something else, says I Ching commentator Stephen Karcher is the ‘spirit of the time’.

“We don’t just live in a world regulated by mechanical time. We don’t live in that world in our dreams, or in the kind of knots and difficulties that we encounter during our individual lives. These reflect another kind of time. This ‘other time,’ like our dreams and the world they come from is full of spirits,” says Karcher.

Today we prefer to talk in more tangible language and try to prove things scientifically. Instead of talking of spirits and magic, we more comfortably talk of external forces and internal psychology. I prefer to describe my interpretation of the I Ching answer I received as something not yet formulated in my conscious mind but something nevertheless, I already knew deep down already.