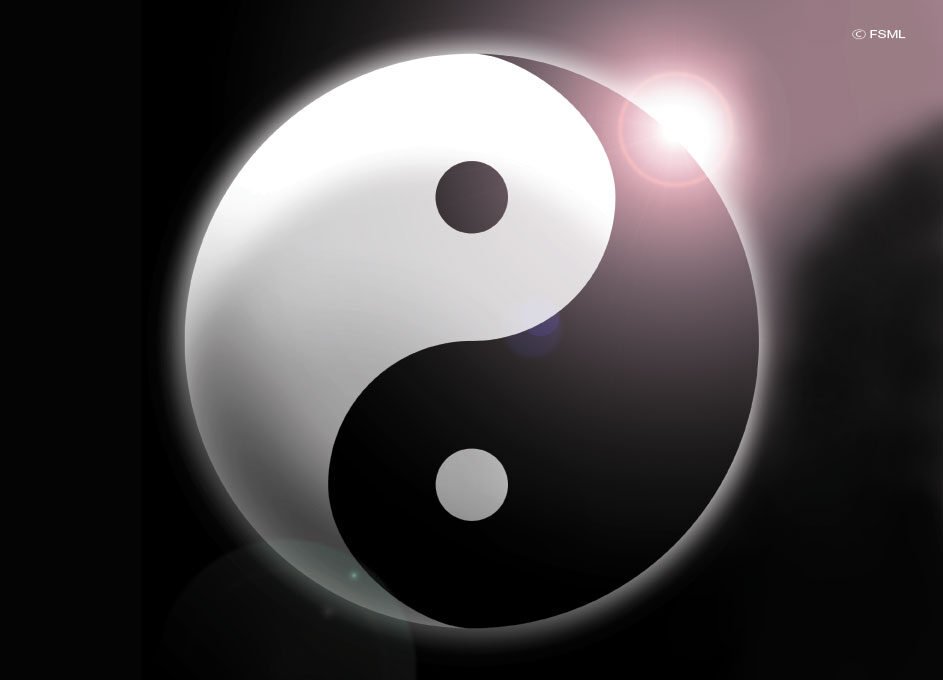 This is the famous T’ai Ch’i symbol, representing many of the basic ideas of Taoist philosophy, some of which are outlined below. However, one question that often arises is:

Taking a look at the wide range of books, magazines, internet sites and other publications, one soon finds a whole host of different orientations of the t’ai chi, such as those shown here: 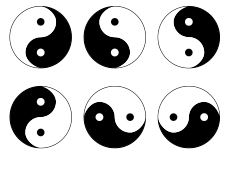 So, which is the correct one ? Or indeed, is there a correct one ? To understand the answer, we must first find out what the t’ai chi is intended to represent. The following sections outline some of the meanings inherent in the symbol.

Yin is the dark, cold, female, introvert, passive side of life, shown as the Black area.
Yang is the light, warm, male, extrovert, active aspect, shown as the White area.
The t’ai chi symbol means that everything in the Universe (the “Ten Thousand Things” of the Tao Te Ching) contains both light and dark, good and evil. These are complementary aspects rather than conflicting. The two small dots within each area indicate that Yin contains the seed of Yang, and Yang contains the seed of Yin.

The Cycles of Life

Much of Taoist philosophy is based on the idea that everything goes in cycles – the years, the months, the seasons, even human life itself. These cycles are represented by the Circle of the t’ai chi, and the flow of time is indicated by the way the Yin and the Yang areas increase and decrease as they progress around the symbol. 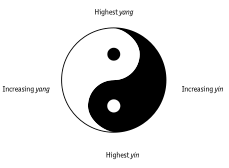 The four seasons – Spring, Summer, Autumn and Winter – are not only part of the Cycles, they are also linked to Yin and Yang.
Spring – the time of new growth, and increasing Yang
Summer – the time of greatest heat, and highest Yang
Autumn – as the year cools, increasing Yin
Winter – the coldest time, highest Yin
In the t’ai chi symbol, the seasons are mapped to the appropriate areas of Yin and Yang: 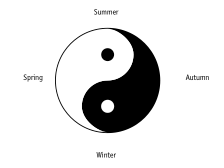 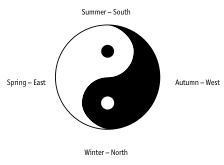 In China the South is considered to be the main direction and is shown at the top of their compasses, unlike in the West where we place North at the top of our maps and compasses.

If we agree that the t’ai chi symbol is a representation of all the aspects discussed above – the Yin and Yang, the Cycle of Seasons and the Compass Directions – there is only one ‘Correct’ orientation of the T’ai Chi, being the one used here. Any other orientation may well represent the Yin and the Yang, but does not properly represent the philosophy behind the symbol.