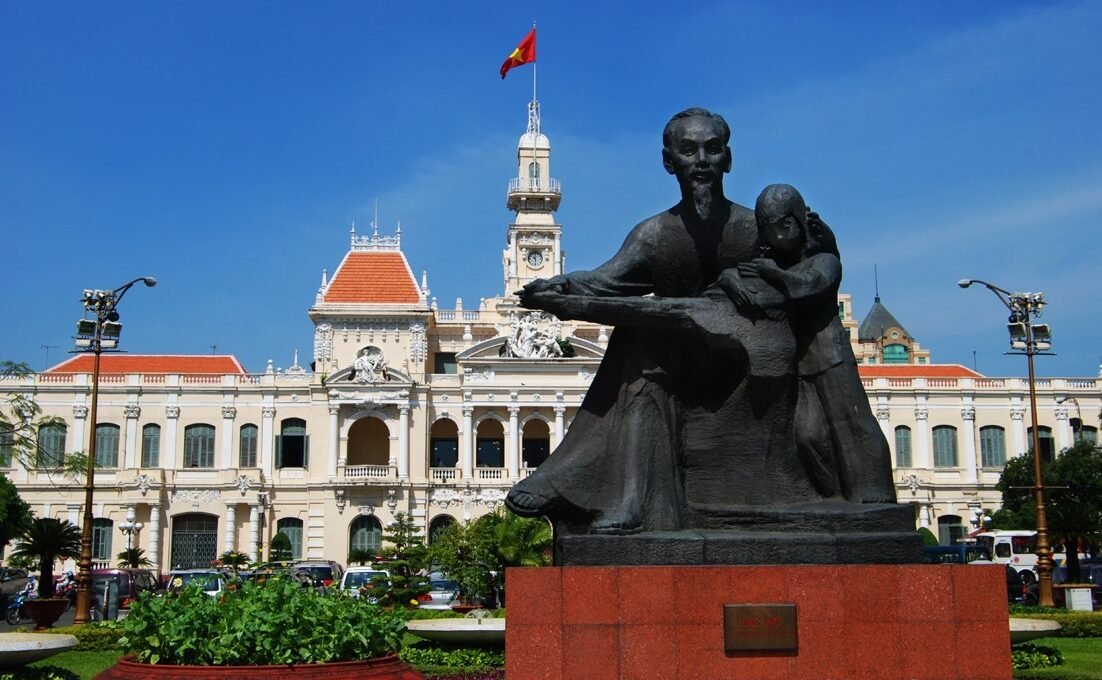 According to feng shui basic rules, an auspicious spot is a location which possesses Four Celestial Animals: Black Turtle at the back, Green Dragon on the left embrace, White Tiger on the right embrace and Red Phoenix in the front. Red Phoenix represents broad Bright Hall, which means prosperity, money coming in and Black Turtle represents noble person covering your back, which means people whose social status higher than you helping you.

Interestingly, Ho Chi Minh City (also informally known by its former name of Saigon) possesses a very broad Ming Tang (represented by Red Phoenix in the front), the Can Gio Mangrove Forest, biosphere reserve listed by UNESCO. No wonder Saigon was once called “Oriental Pearl” attracting a lot of money flowing in.

Thus, Ho Chi Minh City possesses 3 Animals but no Black Turtle at the back as there is no either mountain ranges or any single hill near Saigon. In Feng Shui, lacking Black Turtle means no political power, bad health.

Knowing about this, the Nguyen Dynasty (1802 -1945 AD) has built a citadel named Gia Dinh shaping like a turtle and they called it “The Turtle Citadel” or “The Octagon Citadel” (Octagon represents Ba Gua in Feng Shui).

Following the invasion of the French colonists, the citadel was destroyed entirely for purpose of French-styled urban planning. However, the French colonists replace the North gate of Octagon Citadel (Ba Gua Citadel) by a water plant and addressed it as “16 the Catinat Street”.

After the French withdrawal, in 1970 a Feng Shui Master consulted the then president of South Vietnam Republic regime that he had to build a Turtle Lake Fountain in the location of water plant at 16th Catinat Street for sake of the city’s power. As Guo Pu, the author of The Book of Burial claimed, “Qi is dispersed by wind and stored in water”. Putting water lake here helped storing Qi energy while the water fountain helped activating auspicious Qi energy.

To represent a mountain, the Feng Shui Master advised on building a tall tower shaped like a sword height of 34 meters and erecting 2 turtle statues. Both turtle statues were made in bronze and one was put at the top of the tower while the other at the bottom of the tower. Bronze turtle represents Metal giving birth to Water, enhancing Water element.

Looking from above, the shape of the lake is Ba Gua, Octagon outside while walkways, fountains shapes exactly like a Tai Ji inside. Now the Turtle Lake Fountain has become a symbol, tourist hotspot.

Relating to Black Turtle, there is also an ancient temple in Saigon widely known for miraculous blessing on the infertile couples for having children, especially sons. That temple named Phuoc Hai Temple (loosely translated as “Fortune Sea Temple”) was built in the North side of Saigon and having a lake for people to release alive turtles here.

This Daoist Buddhist Temple base on Karma Law of “Give ‘n Get” stating in order to have children, you must nourish life of other creatures by releasing animals and keep a plant-based diet during having pregnant. This temple is very famous, especially since 2015 when Barrack Obama – President of United States paid a visit during his tight schedule in Vietnam.

Should a traveller becomes curiously interested in those Feng Shui stories mentioned above, he/she can come to these tourist attractions: