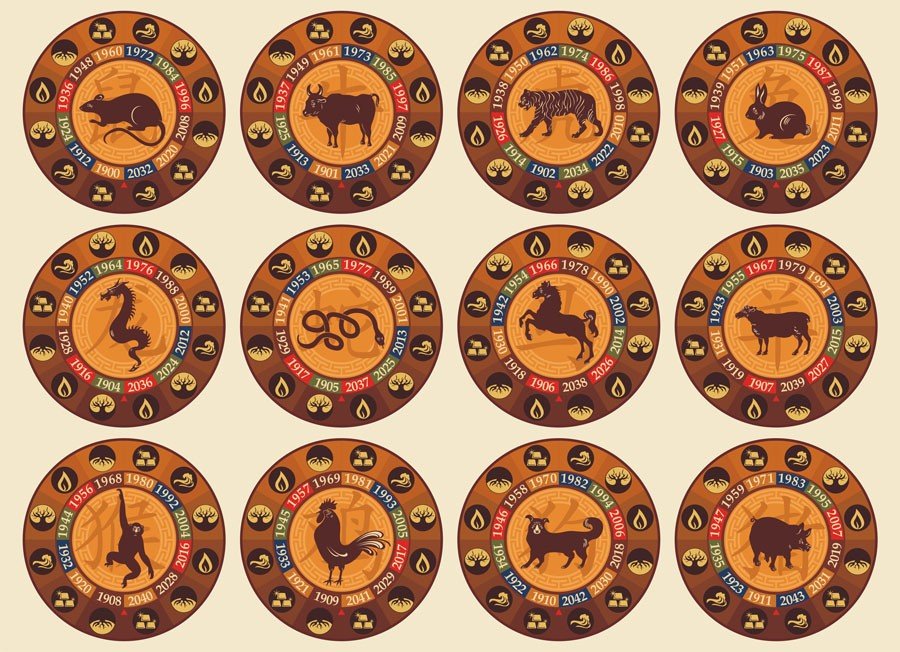 Anyone can work out which animal sign on the Chinese Zodiac represents them, based on their year of birth, but the story of how each animal got its name is intriguing. Derek Walters explains

Stop me if you’ve heard this before. Once upon a time, the Lord Buddha called all the animals to Him, but only 12 turned up… so you have heard it? A charming tale, but it doesn’t really tell us how the 12 signs of the Chinese zodiac got their names. The truth, however, is far more interesting.

By Chinese standards, the 12 animal names are a relatively recent invention, from about the eighth century, and they are not mentioned in the Chinese classics. They seem to have been invented by monks anxious to make the Chinese calendar more easily understood.

Before the names were invented, the 12 months and the 12 double-hours of the day were counted by special Chinese characters called ‘branches’. (See issue four for a fuller explanation). But outside the educated classes, these branches were meaningless words. The use of the animal names helped people to associate the branches with the various times of the day and months of the year.

And The Rat Was First…

To begin with, for the midnight hour, the Rat was chosen because these creatures are most active at night. For mid-day, and the month with the longest day, the Horse was chosen. Why? Because the sun is the yang force; yang is masculine, and what was the animal that men were most interested in? The Horse, of course.

The month including the Spring Equinox was represented by the Rabbit since the Easter bunny is a universal symbol of springtime, and is additionally appropriate since these creatures prefer the early morning for their constitutional exercise. Conversely, on the opposite side of the day, sunset, when the chickens come home to roost is the Rooster, also representing the month containing the Autumn Equinox.

The Chinese New Year, however, begins about February. Because the first month was associated with the Emperor, the animal which began the year had to be a symbol of Royalty, and what could be more noble than the Tiger, which even has the character for ‘king’ written on its forehead.

After the Spring Equinox came the Spring rains, heralded in the sky by the arrival of the constellation of the Dragon, so this, the only mythological animal among the 12, took the next place.

He was followed by his reptilian colleague the Snake, though the choice of this creature was probably due to the fact that, according to the ancient Chinese dictionary, the original character for the sixth double-hour was written in a continuous line, like the body of a Snake.

Like the Dragon and the Snake, the 12 animals are grouped into pairs, the first being yang and the second yin, like the two sides of a coin: the Dragon is magical and extrovert, the Snake mystical and meditative. Similarly, the Tiger and the Rabbit form another pair, the Tiger conquering by force, the Rabbit by tact.

This explains why the seventh sign is a Sheep. Its companion sign, the Horse, represented the male side of human personality, so, since flocks of sheep are all female, the Sheep was chosen to represent the opposite qualities!

Take the last two digits from the year in which you were born*. If the number is greater than 11, subtract 12 from it. Keep subtracting 12 until you have a number less than 12. Then read off your sign from the table below:

Before the Rooster was chosen to represent the 10th sign, the old Chinese character was a wine bottle, symbolising the end of the working day when it was time to relax and enjoy a drink, read, paint, or listen to music. Astrologically, its companion sign showed skill and craftsmanship. What animal showed manual dexterity better than the agile Monkey?

The last two signs show the end of the day; time to lock up the house and go to bed. For the 11th sign, the ancient Chinese showed a hand holding a spear; the Dog was the obvious choice for this sign. And finally, for the sound of raucous snoring when everyone was tucked up in bed asleep, what could be more appropriate than the honking Pig?

But alas, not quite finally. There was still one sign to be accounted for. Stumped for an animal to represent three o’clock in the morning, the second sign, it seems that the old monks who devised this wonderful zodiac had to turn to Western astronomy for inspiration. As a last resource, they borrowed the sign of Taurus, and filled up the last gap in the zodiac with the Ox.

Derek Walters is an authority on Chinese traditional culture and is the author of several books on Chinese astrology, feng shui and other aspects of Chinese philosophy. He makes frequent visits to the Far East and is a member of the Scientific Organizing Committee for the international symposia on Chinese Astronomy and Traditional Culture at the Purple Mountain University, Nanjing, as well as being an honorary member of the society of Diviners, Hong Kong. Although officially retired, Derek still lectures regularly in Germany, and has inaugurated courses in Russia and the post-Soviet states.