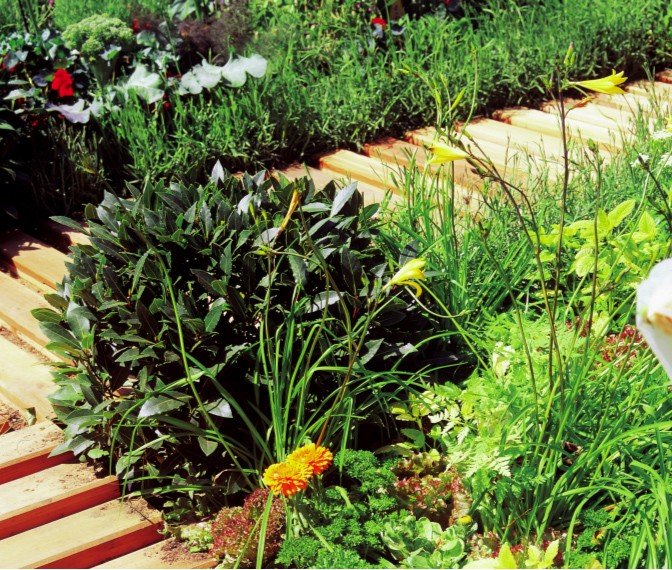 In the Feng Shui garden, you can use pathways and paving to create auspicious conditions in your garden. Nicola Stocken looks at ways of improving the beneficial flow of ch’i around your ‘outdoor room’

Ch’i is the invisible essential life force present in every form of life in the universe,’ writes Gill Hale in The Feng Shui Garden. ‘Where it flows freely and accumulates, there is health and abundance.

Where it stagnates, there is sickness and decay.’ Ch’i naturally flows in a meandering fashion and by understanding feng shui principles and how they relate to a garden’s plants, furnishings, landscaping materials and colours, it is possible to direct the movement of ch’i for maximum benefits. Well-designed paths channel ch’i to the right places, at the right speed, in an unfettered manner.

However, the average garden path is a utilitarian line of cracked concrete linking the house with the outside world, or leading to the washing line, compost heap or dustbin. All too often, it seems, a garden path is born out of necessity, a hotchpotch of leftover paving slabs or hastily laid concrete. Yet, with a little forethought and modest budget, even the most unpromising eyesore can be transformed into a meandering walkway edged with delicate creeping plants where the emphasis is on lingering to savour the journey rather than the ultimate destination.

Pleasurable, winding paths are at the heart of the feng shui garden, a vital ingredient providing an easily controllable conduit for ch’i.

Unfortunately, the passage of ch’i is all too easily disrupted. It can, for example, become trapped in dark restricted corners, constricted by narrow, overgrown pathways, or blocked by obstacles such as rampant shrubs, dense hedges or wrongly positioned statues. Runway-strip style paths are especially detrimental, as they have a siphoning effect on ch’i which makes it flow too fast. This effect can be beneficial in shady, dead-end corners where the ch’i is stagnating, but such a fast flow must be slowed down again with a gentle curve at the end of this section of the path.

Ch’i can flow in both directions, especially on walkways which are straight and link two open areas. In these instances, the closer the path is to a side of the garden, the more dominant the ch’i flowing from that direction, be it North, South, East or West. According to Chinese tradition, the influence ch’i has on different areas of a garden (which, as represented by the pa kua, correspond to eight aspects of life – Fame, Relationships, Children, Contacts, Career, Knowledge, Health and Prosperity) varies according to the direction from which the ch’i originates.

Ch’i from the North is nurturing and caring but may become sluggish unless counterbalanced by the more energetic ch’i from the South, a highly propitious force. Easterly ch’i is wise, fostering growth, but be wary of ch’i from the West because that is the direction of the White Tiger. It can be unpredictable, even dangerous, and can become too powerful if allowed free rein on straight paths running into the garden from the West. The key to controlling ch’i lies in maintaining a delicate balance between the different types by applying feng shui principles and sound garden practice.

One of the most effective means of harnessing ch’i is in the sweeping curves which crop up quite naturally as part of many inviting garden schemes, in flower borders, walls, patios and, especially, paths. Curved paths serve many purposes. On the one hand they create informal subdivisions within the space whilst also linking different areas into a unified whole.

On the other, a curved path creates a sense of mystery when it is at no point visible in its entirety, providing opportunities for lovely edging plantings of dishevelled foliage and seasonal flowers. Curves are also a useful design tool for making a space appear deceptively larger. ‘The eye is drawn along curves, distracting attention away from the back or side boundaries which clearly define and limit a space,’ explains garden designer Stephen McLoughlin.

Curved paths lead naturally into circular paved areas to form spiralling shapes which snake in and out of the various areas of the garden, creating a flowing passageway for ch’i. Ideally, paths, patios, steps and walls should be constructed in the same materials – with good taste dictating no more than three contrasting materials.

Appealing combinations for path designs include grey flagstones edged with red brick pavers, bricks laid in a winding herringbone pattern, or slices of tree trunk set in bark chippings. In each case, the end result is greatly enhanced when its edges are blurred by spreading plants such as campanula, lavender, miniature grasses or the charming daisy-like heads of osteospermum.

However delightful the path design, it will only work if it blends with the existing hard landscaping, so take samples home and check them for compatibility in both wet and dry

conditions. In the feng shui garden, paths work best when they are also compatible with the theory of the Five Elements – the phases of ch’i which, in their natural progression, are Wood, Fire, Earth, Metal and Water. The healthiest outdoor settings contain a balance of the Five Elements in sequence, each one influencing different areas of life. Earth, for example, represents stability; Metal is associated with wealth; Water represents communication and knowledge; Wood is linked with creativity; and Fire denotes motivation.

The influence of each Element is increased or decreased by introducing its corresponding shape and colour into the garden design. To encourage greater prosperity, incorporate the Metal Element in the form of curved arches and seats or trained plants. The Water Element is easily introduced as flowing water features, bridges and drifting clumps of blue-tinted plants such as eryngium and miniature grasses.

Wood, denoting creativity, manifests in columnar-shapes, brick pillars and wooden posts, whilst motivation is fostered through Fire with its hot colours and obelisk-style shapes. Finally, Earth, with its overtones of stability, is represented by box-like shapes such as pergolas, square raised plinths, rectangular flower beds and straight stone paths.

Path materials, with their variety of shapes, textures and colours, provide many opportunities for putting the Five Elements theory into practice. The choice of materials is wide, ranging from red or brown-hued clay pavers, stone (natural or man-made) or cobblestones, to pebbles, timber decking or bark chippings. Costs vary from a few pounds per square metre for gravel or bark chippings to more than £40 for the equivalent area of second-hand flagstones, granite setts (small stone blocks) or hardwood timber decking.

From both a good design and feng shui angle, it is important to achieve a balance of dark and light materials. For instance, a sun-drenched path edged with silvery Potentilla argyrophylla or rock rose is best suited to darker brick or slate whereas a shady pathway with dark overhanging foliage will benefit from light-coloured gravel or paving.

Many amateur gardeners think that the hard work is done once they have chosen the path design and materials. In fact, the actual laying of a path can be a minefield. ‘The biggest mistake most people make lies in laying the sub-base incorrectly,’ explains landscaping specialist Kevin Looker. ‘They try to cut corners instead of accepting that they must excavate to about a spade’s depth and then backfill the lower half with a mix of brushed concrete and crushed hardcore, and the remainder with the flooring material set in a semi-dry mortar.’

Other commonplace errors include laying paths which are too narrow for two people to walk along comfortably side by side, neglecting to slope the path so that rainwater drains away or laying the flooring material in such a way that the joints create the wrong effect.

‘The dynamics of paving patterns are carefully contrived to create feelings of movement or stillness,’ notes designer Robin Templar Williams. For example, paths which are laid with unbroken lines running away from the eye evoke a sense of movement which is useful for linking walkways and paved areas.

Furthermore, a crisp grass edging helps delineate the border between the two materials, the best edger for garden beds is either a specialized hand tool or mechanical edger.

On the other hand, paths with diagonal lines running from side to side – as in a brick basketweave pattern – encourage the eye to linger, conveying a static ambience which is especially suited to a tranquil area for relaxation. Such detail punctuates the uniformity of the pathways whilst dovetailing into the natural flow of plant life on the path’s edges.

Edging plants – sprawling, creeping or spilling – soften the hard edges of paths, imbuing them with a maturity beyond their real age and creating a natural bridge between the garden’s hard and soft landscaping. They also bring scent – try pots with herbs such as prostrate rosemary, lavender, sage or mounds of aromatic thyme – and colour which is helpful in achieving balance between the Five Elements. Geranium, for example, spreads prolifically and among its many varieties are flowers in deep shades of blue associated with the Water Element.

Metal can be represented by the pure white flowers of Helianthemum apenninum or the silver foliage of cotton lavender. The yellow flowers of Sedum reflexum evoke the Earth Element while red gazania or deep pink dianthus suggest Fire. Finally, Wood is easily introduced through the dense green foliage of hosta or many of the conifer family.

Nicola Stocken Tomkins is a garden photojournalist who travels widely in search of lovely gardens to photograph.