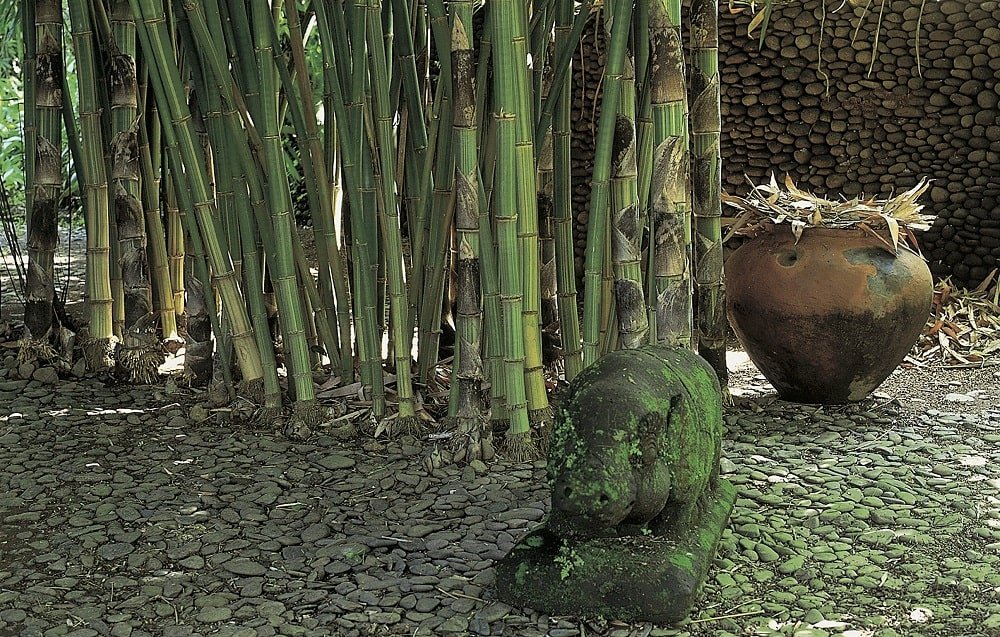 No other plant has such an auspicious influence on feng shui in the garden as the prolific bamboo – symbolising longevity and good health it is a powerful antidote to sha ch’i.

Of all the plants in China, no plant has been venerated to quite the same degree as bamboo. This is hardly surprising, for no plant – other than perhaps rice – has played such a vital role in the lives, culture and customs of billions of people throughout the Far East.

With such an impact on the Chinese way of life, it follows that in feng shui bamboo also has considerable importance. Traditionally used to protect houses and gardens from sha and to facilitate and channel the smooth flow of ch’i with flutes, bamboo remains a highly versatile plant in the feng shui garden.

But bamboo also played a part in the early development of feng shui and the growth of its cultural significance and importance in China.

Feng shui developed as both an art and science in early rural China where the fate of its inhabitants were closely linked to the workings of Heaven and Earth. As people’s destinies depended on the fertility of the earth, enriched with plentiful sun and water, they began to observe nature closely to benefit from its bounty and to avoid becoming a victim of its powerful forces. It became abundantly clear that for good fortune and prosperity people had to divine the ideal location in which to live and farm, in concert with nature’s natural cycles.

A sacred harmony between Heaven, Earth and Man had to be achieved through the auspicious placement of a dwelling, farm or orchard. Feng shui was this art of placement which unlocked the mysteries of the universe and became the key to understanding the ever-changing environment. Born out of the customs, culture and beliefs of agrarian China, feng shui was designed to reduce the uncertainties of life in a country where people struggled to be at one with the forces of nature.

Feng shui had to enhance nature, not disturb it. And, from the outset, bamboo played a vital role as it was entwined with the way of life in China and present everywhere in the natural landscape. Chinese gardens sought to capture the minaturised essence of the landscape, and bamboo was strategically planted to create a rhythmic flow and natural order to the garden environment.

In China, bamboo is seen both as beautiful and practical, it is known as a ‘blessing from heaven’. It is also highly symbolic and, like many things in China, is a meeting of aesthetics, philosophy and function. Over the centuries, bamboo has been used in many art forms and numerous decorative treatments as well as being fashioned into a practical everyday staple for a vast range of housewares, furniture and tools.

However, it is not only cherished for its innate beauty and utilitarian properties. Throughout China, Japan and other parts of Asia bamboo symbolises fidelity, wisdom and longevity. In China it also represents good health, humility, modesty and eternal youth as well as depicting joy, laughter, peace, serenity and good fortune. Bamboo is also one of the ‘four noble plants’ that symbolise happiness along with the plum, the orchid and the chrysanthemum.

Above all bamboo is respected for its strength. The works of scholars, writers and aesthetics have often admired its power and rapid growth, along with its ability to bend but not yield in high winds. The attributes of bamboo plants have given rise to many Chinese proverbs, including an astute Taoist saying which describes bamboo as giving way to external pressures in order to transcend them. This saying is still widely used in China today.

In the feng shui garden bamboo’s strong yang quality makes it an ideal material for fences, screens, trellises and gates as well as frames or canes to support other plants. In feng shui bamboo was used to protect against negative ch’i in the form of a fence or screen around the house. Inside the fence a basket of matted bamboo leaves was erected on a long pole and raised over the garden wall to ward off bad sha from the property and hence bring good fortune to the occupants.

From a botanical stand point, bamboo belongs to the large Gramineae family, which includes domestic grasses, wheat, oats and maize. There are literally hundreds of different species of bamboo which grow wild in Asia, Africa, Australia and the Americas, mainly between the latitudes 40 degrees South and 40 degrees North. The bamboos found in Europe however are not indigenous and were introduced by plant collectors from the 18th century onwards.

From a source of food to a source of inspiration, bamboo in some form or another is used by over half the world’s population in the home, garden or workplace everyday. It’s used for food, medicine, music and transport and provides the brushes, paper and writing tablets for Chinese calligraphy as well as being the subject matter for paintings and ink drawings.

Books on the cultural history and significance of bamboo as well as its expression in Chinese and Japanese art, literature and poetry of the past are plentiful. For the contemporary feng shui gardener, however, bamboo is one of the most popular, versatile and relevant plants.