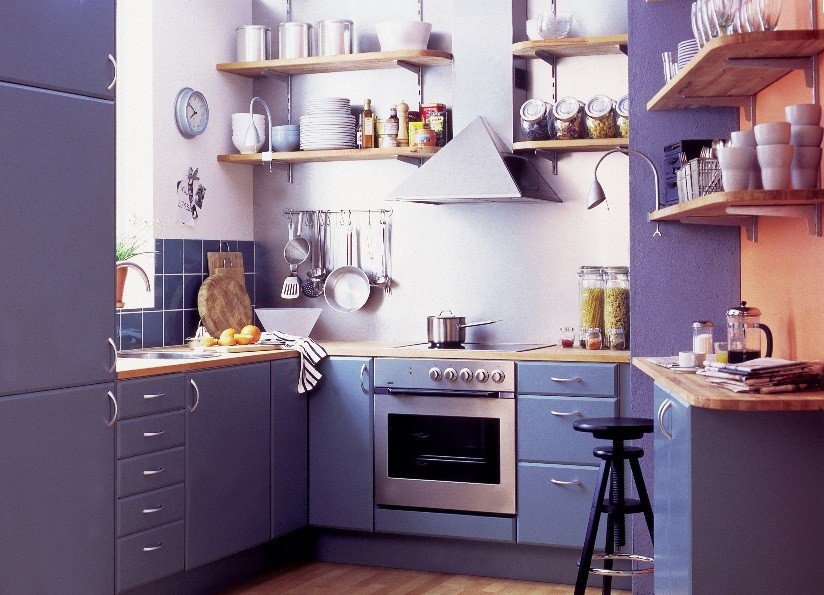 Wet rooms’ such as kitchens and toilets are considered to be the least auspicious rooms in the house, whose locations can sometimes determine the rise or fall of the fortunes of a home. Kitchens involve the use and disposal of a lot of water in the process of food preparation, cleaning and washing up, but Water is symbolic of wealth in feng shui and the draining away of water denotes the dampening of Wealth Luck.

However, there is a silver lining to this, as a ‘wet room’ will damp down a ‘bad luck’ sector. So positioning a ‘wet room’ in an irrelevant or bad sector is actually a benefit to the occupants of the household. As a result creating an auspicious kitchen involves neutralising its inauspicious nature by concentrating on the location of the room and on the placement of kitchen equipment.

“The Fire and Water Elements clash in all kitchens”

Feng shui Masters recommend that the kitchen should be located in the most inauspicious sector of the home, based on the four worst compass directions of the head of the household, derived from his or her kua number calculation. This helps suppress the ‘malevolent’ energy in that sector. The Fire from the stove generates yang energy which neutralises the bad Luck of this inauspicious location, thus making it more auspicious. The kitchen should also ideally be built in the inner half of the house away from the front door.

There is a constant clash of the Elements of Fire and Water in the kitchen, manifested in the fire from the stove and the water from the sink or refrigerator. Avoid aggravating the clash by making sure that the placement of the cooker (Fire) does not put it into direct conflict with the sink or refrigerator (Water).  A direct conflict will occur if they are directly facing each other.

To achieve harmonious energy, do not put the stove directly opposite the sink or refrigerator as this is deemed as confrontational. The stove should not be placed directly next to the sink either.

It is also considered unlucky to have a stove in the centre of a kitchen like an island, as is sometimes favoured by modern designers. This form of design creates an unbalanced atmosphere as the heart of the room is dominated by Fire which could result in disharmony in the family.

In ancient China stoves were simple devices fashioned out of clay or earth with an opening into which firewood was fed. This opening is the ‘fire mouth’ or ‘oven mouth’.

Modern feng shui practitioners, however, tend to equate the ‘fire mouth’ with the source of the electricity or of the gas fueling the stove – which is usually located behind the back of the hob. This term should not be mistaken for the actual opening of the modern oven door at the front.

Where possible, position the stove so that the fire mouth taps into the sheng ch’i or the Prosperity & Abundance direction of the patriarch or matriarch of the home.

If restrictions in the design of the kitchen mean that it is impossible to tap into any of the breadwinner’s auspicious directions, try to orientate the stove mouth towards the third best direction, the nien yen or Harmonious Relationship Luck, of the matriarch of the household.

The traditional role of a mother is to prepare meals for the family and so this will bring harmony to the household.

Next think about the kitchen appliances. For those who use a microwave position it in one of your auspicious directions. Then orientate the plug of your rice cooker or microwave so that it comes from one of your favourable directions. This principle should also be applied to toasters and kettles as all these kitchen devices provide fuel for the body.

As already discussed, the two main opposing Elements in the kitchen are Fire and Water, but a balanced interaction between the two will bring about harmony in the kitchen. Feng shui defines the kitchen as a yin area where non-living things such as food, meat and vegetables are stored.

It is not an area where the family would spend a lot of their time, like the living room, for example. However, if a part of the kitchen is used as a breakfast or dining area – a place where there are regular family activities – the presence of yang energy will strike a balance in this room.

The use of mirrors in feng shui is double-edged. The correct placement of a mirror can enhance or rectify a situation, but the wrong usage could greatly harm the occupants of a home. One of the main taboos of feng shui in the kitchen is the placing of a mirror where it can reflect the fire on the stove.

This is particularly harmful when the mirror is placed on the back wall of the stove and reflects the food being cooked. Eastern feng shui Masters call this ‘fire at heaven’s gate’ which they warn will threaten a fire in the house or mishaps or accidents to members of the household.

On the other hand, placing a mirror in a dining area – provided it does not reflect the stove – so that it reflects the food on the table is very auspicious as it is symbolic of ‘doubling the wealth’ of the family. The Chinese equate food to wealth, as without wealth there would be no food on the table. It seems that some students of feng shui may have misunderstood this concept and may have thought mistakenly that a mirror by the stove will have the same effect.

Make sure that the stove is not in direct alignment with the kitchen door, especially if there is no alternative but to locate the kitchen near to the front door. If however the cooker faces a toilet, keep the toilet door closed at all times.

Do not place the stove between two water features such as the sink and refrigerator. In feng shui terms Fire placed between two Waters is symbolic of constant sorrow in the family.

Make sure that the cooker is not installed directly in front of or under a window as this denotes lack of support for the household.

Do not place the cooker directly underneath an exposed large beam. If the stove cannot be relocated, place a pair of bamboo flutes suspended on red strings above the stove to lift the resultant downward pressure off the cooking area.

Make sure that the cooker is not in the firing line of a protruding corner from a cupboard or table as ‘poison arrows’ emanating from sharp corners cause negative energy to be directed towards the stove and the cook.

When placing the cooker also make sure that it does not face a staircase which can generate ‘poison arrows’ to the food and to the cook.

Do not place the stove or cooker in a corner of the room, as this puts the cook in a disadvantageous position, leaving his or her back unprotected from someone coming into the kitchen from behind.

If a stove is located in the North-west sector of the kitchen, this will suppress the Luck of the household’s breadwinner – so don’t do this!

It is very unlucky to install a stove directly underneath a toilet on an upper floor. If this is the case in your kitchen, try to relocate the cooker. If this cannot be done, install a strong uplighter or spotlight in the area shining upward towards the ceiling to lift the negative energy off the food being cooked.

It is also unlucky for the hob to be placed beneath a water tank, perhaps in the attic, as this symbolically puts out the Fire of the occupants, symbolising the loss of good fortune.

Kitchen knives should not be exposed by hanging them on the wall either on a rack or stuck onto a magnetic plate, as is favoured by some modern kitchen storage design. Instead store knives in a wooden block or put them away in drawers.

It is also considered inauspicious to display strings of garlic, onions or other dead plants in the kitchen as they attract too much yin energy in an already yin environment. Store them on vegetable racks or in baskets in cupboards.

To create abundance in the home, make sure the refrigerator and larder are well stocked at all times. In traditional Chinese homes, the rice container is never allowed to be empty. It should always be filled up as soon as the bottom of the jar is visible. In the Western context, the potato rack, bread bin or pasta jar should never be completely empty. Apart from good housekeeping, this practice symbolises that the family will never be short of food.

To activate Wealth Luck, place three coins in a red packet and bury it in the rice or other staple food containers. This is supposed to bring continuous good fortune to the household. These coins are renewed after every Chinese New Year to rejuvenate the Luck for the family.

In the West, coins in a red envelope can be placed in the bread bin or pasta jar, if rice is not the staple food, and also renewed every New Year.