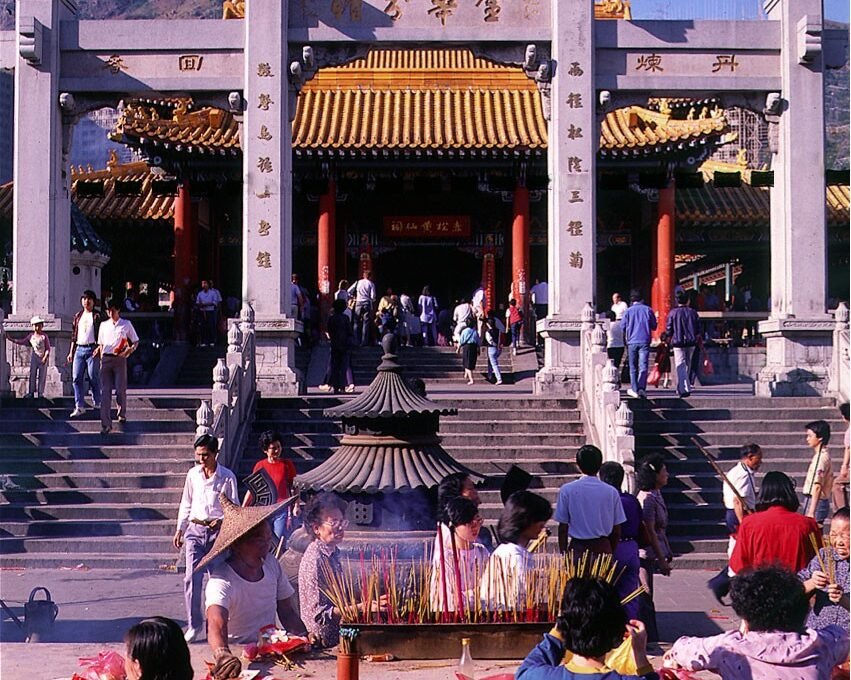 Bustling and bountiful, Hong Kong has many hidden treasures besides the cheap duty free shopping areas. The Wong Tai Sin Temple is one such treasure

According to the legend, Wong Tai Sin was a shepherd boy living in an isolated part of Chekiang Province called Red Pine Hill. At 15 an immortal found him in the fields and taught him the Taoist art of refining cinnabar to make medicine, which was said to cure any illness. Following this experience, he spent the next 40 years of his life a virtual recluse until he was found by his brother, who had apparently spent the time searching for him and the sheep in his care.

Wong Tai Sin achieved fame primarily as a healer because of the miraculous properties of his special medicine. However, today he is worshipped by both those who are worried about their health but also those with business problems. Wong Tai Sin Temple is one of Hong Kong’s most popular places of worship, and the temple built in his honour follows a number of key feng shui principles.

Wong Tai Sin is decorated in a riot of colours with features that include red pillars, a golden roof embellished with blue friezes, yellow latticework and multicoloured carvings. The roof tiles end in upswept ridge tiles capped by lucky toads and mythical animals such as the jishou. A traditionally carved granite archway separates the two terraces of the main temple.

It is at the front of the temple in the courtyard where worshippers gather, that one is able to witness the flurry of people lighting traditional joss sticks and placing offerings. There is also a sprinkling of other temples in the grounds dedicated to non-Taoist gods such as Buddha and Confucius, which help cater to Hong Kong’s varied population.

The present Wong Tai Sin Temple was opened in 1973, but the statue of Wong Tai Sin, which is housed in the main temple, was originally brought to Hong Kong from the Guandong Province in 1915 and installed it in a small temple in Wan Chai on Hong Kong Island where it remained until it was moved to the present temple on this site in Kowloon, Hong Kong in 1921.

Almost everyone who visits the temple wants their fortune told. This is done with the aid of a bamboo container holding numbered sticks. The worshipper lights joss sticks and kneels before the main altar making a wish at the same time, then shakes the container gently until one of the numbered sticks fall out. The stick is in turn exchanged for a piece of paper bearing the same number and the ‘fortune’ written on the paper is then interpreted by one of the soothsayers.

Walking Through The Grounds 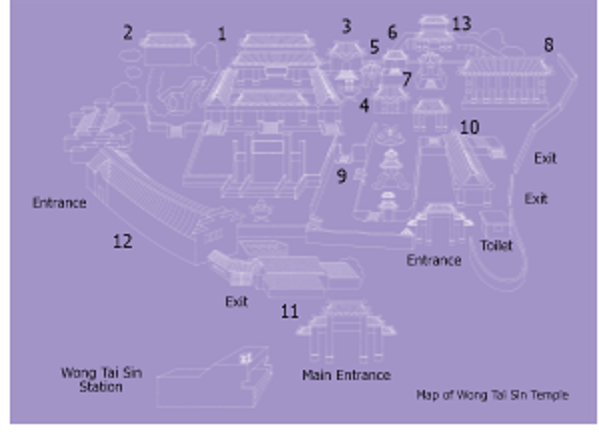 1. The Main Temple A painting of Wong Tai Sin which is displayed on the main altar, can be seen from the outside through the windows and doors. Once inside the hall, one is greeted by splendid chandeliers that hang from the high ceiling to create a soothing ambience. A side altar is dedicated to the Monkey God, also known as the Great Sage Equal to Heaven, a much-loved rascal who earned himself a place among the Buddhist divinities after he had been expelled by the Taoists for creating havoc in both heaven and hell.

2. Nine Dragon Wall Gardens This elaborate Chinese garden is located just to the left of the main temple and features a feng shui pond, rockery, waterfall and a replica of the famous Nine Dragons mural in the Imperial palace in Beijing. It is perhaps the most special part of the temple from a feng shui point of view. These gardens provide a haven of tranquillity away from the hustle and bustle of downtown Hong Kong. Brightly coloured turtles (symbol of the North) gather on the rocks by the pool, often basking in the sun on islands holding statues of lucky toads.

3. Three Saints Hall The Three Saints Hall is dedicated to Kwan Yin, the Buddhist Goddess of Mercy (her statue is placed in the middle of the altar), Kwan Ti, the Taoist martial god (on the right) and one of the 8 Taoist Eight Immortals, Lui Tang Bun (on the left)

4. The Library Hall And Fountain The hall is used primarily as a library to house the teachings of Wong Tai Sin. Both the hall and the fountain at the front represent Wood and Water, which are two of the Five feng shui Elements that can be found throughout Wong Tai Sin Temple’s architecture. The fountain helps stimulate the ch’i and promote health for the whole complex, from its central position.

5. Bronze Pavilion This is the resting place of Wong Tai Sin and represents the Element Metal. Originally, it was a concrete pavilion but was converted into a bronze building after renovation.

6. Memorial Hall The Memorial Hall is the resting place for the spirit tablets of deceased members of Sik Sik Yuen, a Taoist charitable organisation that looks after the daily affairs of the Wong Tai Sin Temple as well as providing a range of social services for the Hong Kong community.

7. Confucian Hall Confucius was born in 551 BC and was one of ancient China’s greatest philosophers. The Confucian Hall is dedicated to him and his 72 disciples.

8. Fung Ming Hall The Fung Ming Hall is specifically used by the public for gatherings and social functions whilst the upper floor has a large conference facility, several meditation rooms and staff quarters.

9. Yue Heung Shrine This shrine houses a portrait of the Buddha of the Lighting Lamp
whose teachings are engraved in a rock tablet to ensure the safety of those who seek his blessing. The portrait represents the Element of Fire and the brick wall in the front hall represents Earth.

12. Fortune-telling And Offerings Arcade Near the main entrance of the temple complex is a row of soothsayers and palmists who will interpret Wong Tai Sin’s predictions for a small fee.

13. Good Wish Garden The ‘Good Wish’ Garden took four years to build and is a lovely replica of the Yi He Garden in Beijing. Within the garden there are a variety of bridges, pavilions including circular, square, octagonal and fan-shaped ones which are built alongside two ponds and an artificial waterfall at the North-west corner of the complex. All the pavilions are linked by a long balconied corridor which features typical Chinese architectural designs. Different types of rocks can also be seen in the garden some of which are made of concrete while others are made up of small pieces of China’s Tai Wu  rock piled and fashioned into animal shapes.

The overall effect is one of community, spirituality and blossoming good luck generated by the layout of the grounds.