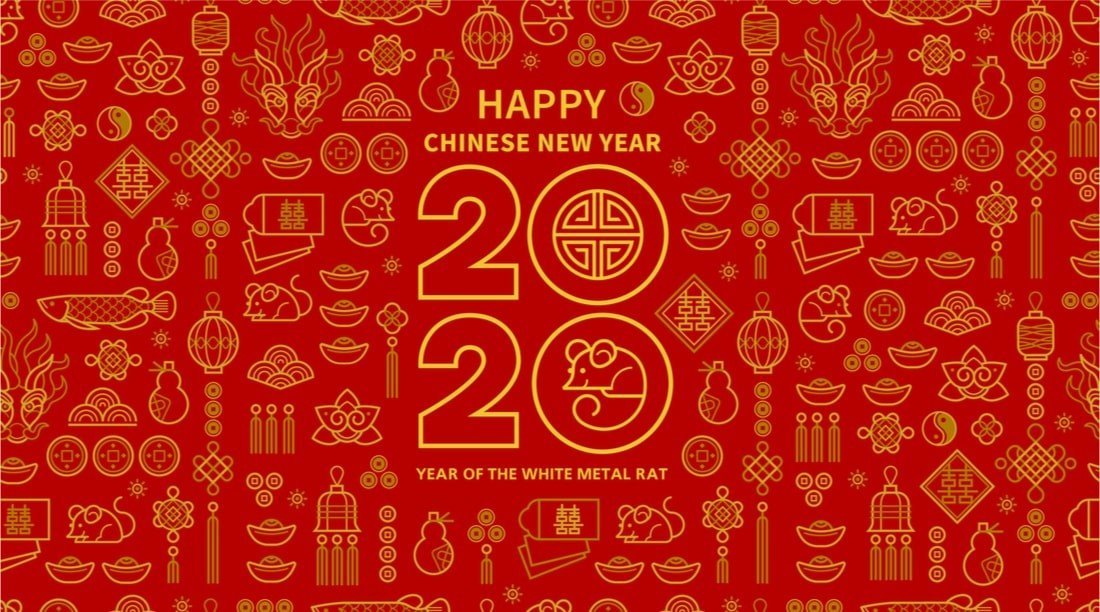 It is the Chinese Year ‘Geng Zi’, often referred to as the Metal Rat.  In the Yellow Emperor’s Classic of Medicine there is an ancient Chinese system of calculation known as the Five Movements and Six Qi (Chi).

With this, ancient physicians were able to forecast the climate and as a result of that, potential illnesses for the year ahead.  This article will give a brief description of the method and a simplified explanation how it applies this year, 2020. 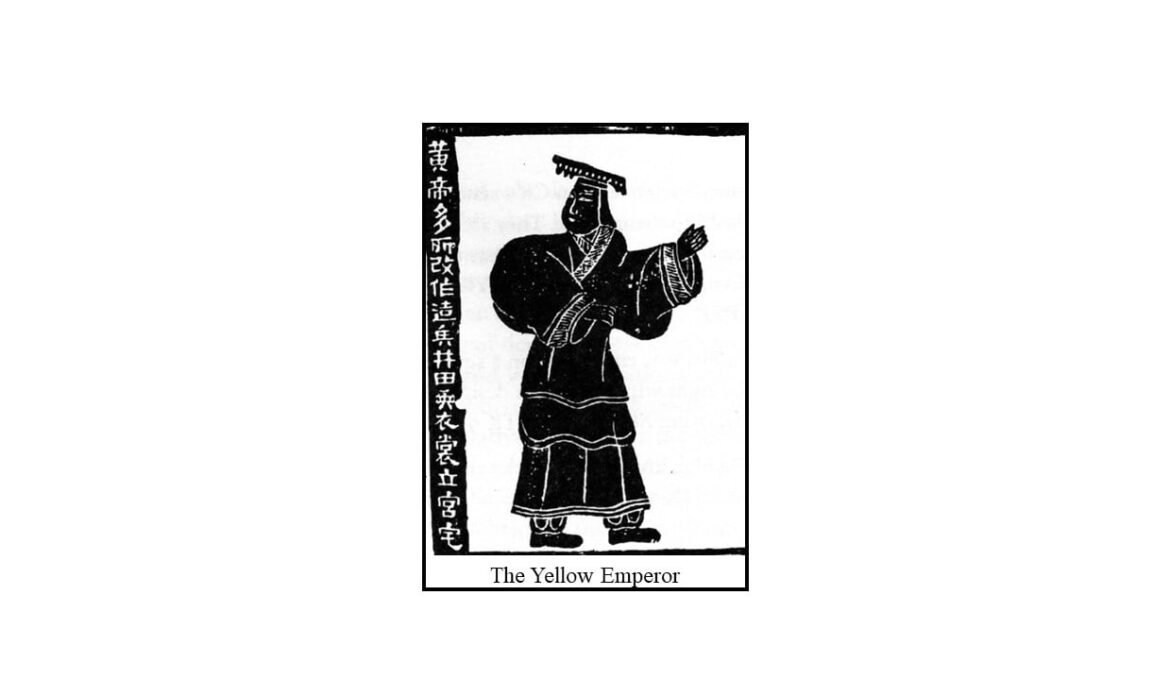 There are two parts to the equation, the first is called the Yearly Movement.  This is like an underlying tendency for the whole year – for example a windy year, a hot year or a rainy year etc.  There are five Yearly Movements based on the Five Elements – Wood, Fire, Earth, Metal and Water.  This year is a Geng/Metal year, and the Yearly Movement is also Metal (see the centre of the chart in grey).  According to the Classic, Metal generates dryness and is cooling, causing drought, withering and falling down of trees, as well as fog and dew.  Something like a whole year of Autumn.  Chinese Medical theory states that this affects the Lungs and the structures that correlate to the Lungs, the skin and body hair.  This underlying influence can trigger pre-existing illnesses that include coughing, wheezing and fullness in the chest.  Making it potentially a bad year for sufferers of chronic respiratory conditions such as asthma, bronchitis and emphysema. 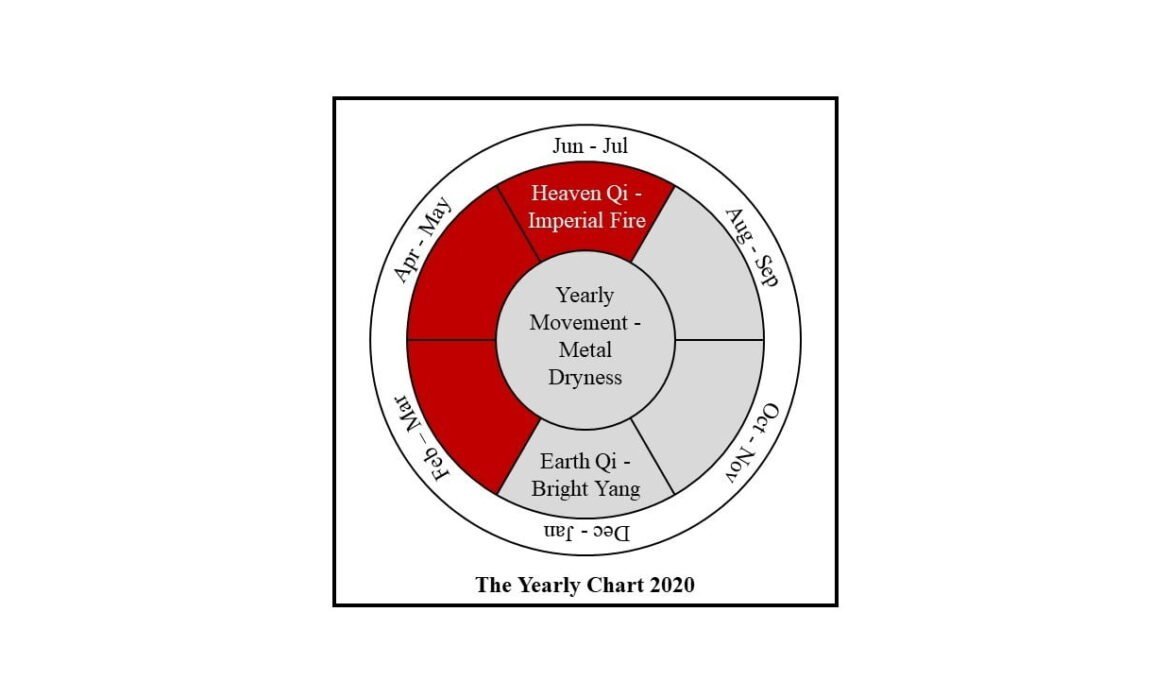 According to the Classic, the Heaven Qi visiting for the first half of 2020 is ‘Lesser Yin Imperial Fire’ (see the upper left of the chart in red).  Imperial Fire, the Fire of the Emperor, generates heat and brings great warmth.  Heat affects the Fire of the body, the Heart, and its correlating substances and structures, the blood and vessels.  Excess heat can cause acute infections in the body or allow infectious diseases to spread. The symptoms it can cause include sores, fever, bleeding, red eyes, chest pain, and as the Heart correlates with the mind in Chinese Medicine – mental emotional symptoms such as mania and delirium.

The Earth Qi visiting in the second half of the 2020 is ‘Bright Yang Dryness’ (see the lower right of the chart in grey).  Like the Yearly Movement above, this is the Metal element generating dryness and coolness.  It also affects the Lungs, skin and body hair.  As a Guest Qi though, the illnesses will tend to be more acute infections or diseases.  Symptoms include stuffy nose, sneezing and dry skin problems.

Of the Yearly Movement and the Guest Qi, the strongest factor in determining the forecast is the Guest Qi.  Of the two Guest Qi, the more dominant is the Heaven Qi.  In analysis it can be seen that Fire controls (melts) Metal in the Five Element cycle (see pictured).  Therefore, the meteorological conditions and ailments of Fire controlling Metal are the most likely to present this year.  This means based on the calculation of the Five Movements and Six Qi we can predict a hot year, with heat drying out the environment, possible droughts, and the equivalent happening in our bodies.  In the body this could be heat conditions of the skin and lungs – rashes, hay fever, sinus and other allergic responses. 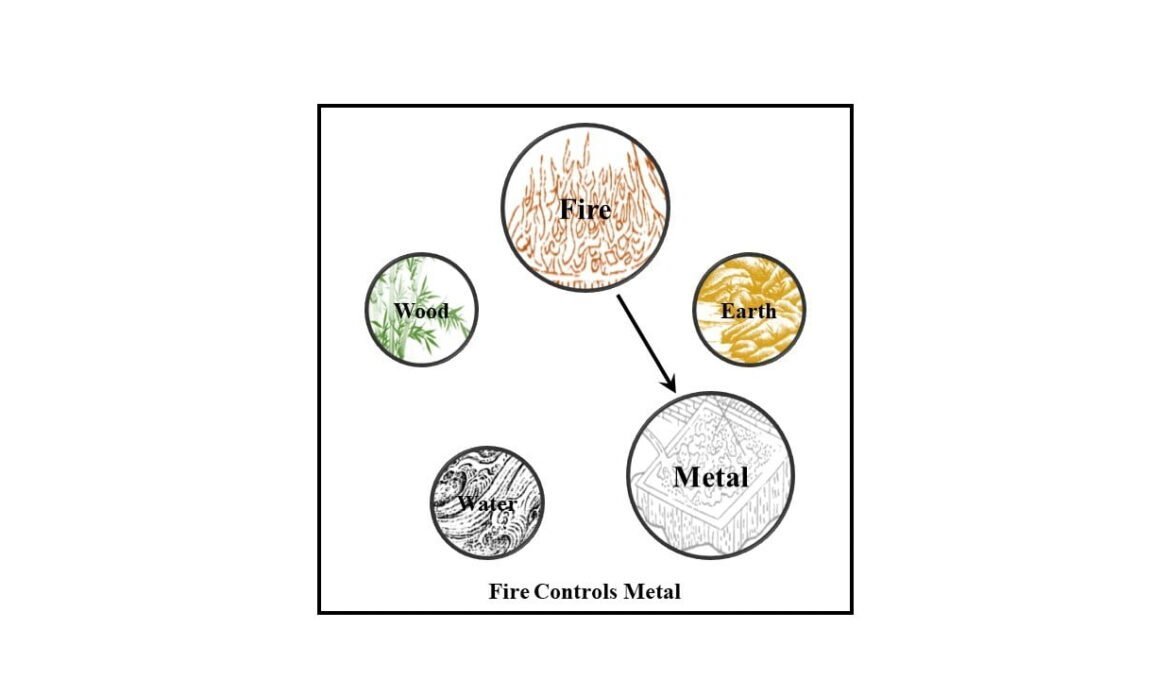 Whilst treatment is beyond the scope of this article, and indeed any Chinese Medical treatment (much like Feng Shui) should only be conducted by a trained professional, there are a few Chinese folk remedies that may be helpful this year.  The ingredients can easily be purchased online or at the Chinese grocery store.

Chinese Pearl Barley (also known as Job’s Tears or Coix Seed) can make an excellent wash for skin conditions.  Simmer 1 handful of Pearl Barley in 2 cups of water for 20 mins, strain away the herbs and allow the liquid to cool.  The herbs can be cooked again to make a second batch.  Bathe the affected area warm, twice daily.  Cools and nourishes the skin to alleviate rashes.

Chrysanthemum flowers make a delicious tea that is beneficial for the eyes.  Add 2-3 dried flowers to boiling water and allow to steep for 5 mins.  Sweeten to taste with honey and drink the tea warm, 2-3 times daily.  The cooked flowers can also be placed on the eyes when lukewarm.  Cools heat to clear the eyes and benefit vision. 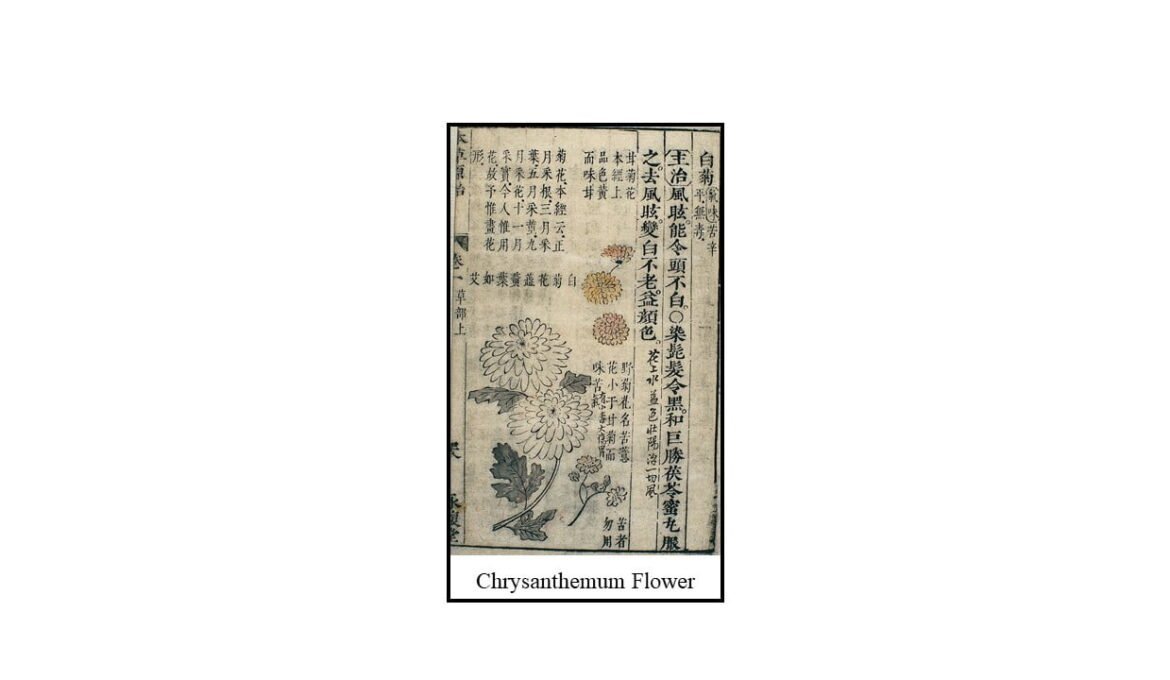 The steam from fresh ginger root can help clear the lungs.  Slice and pulverise 3 slices of fresh ginger, bring to the boil then remove from heat.  Being careful not to burn, inhale the steam by placing a cloth over the head and pot.  Opens the airways to stop cough and benefit the nose.

Rice porridge made with Chinese Red Dates and Liquorice root can help quiet the mind.  Boil 1 cup of rice 10 dates and 15 pieces of Liquorice root in 8 cups of water.  Heat over a low flame for 2-3 hours adding additional water when needed.  Serve warm, daily.  Nourishes the heart to calm the spirit and eliminate anxiety.