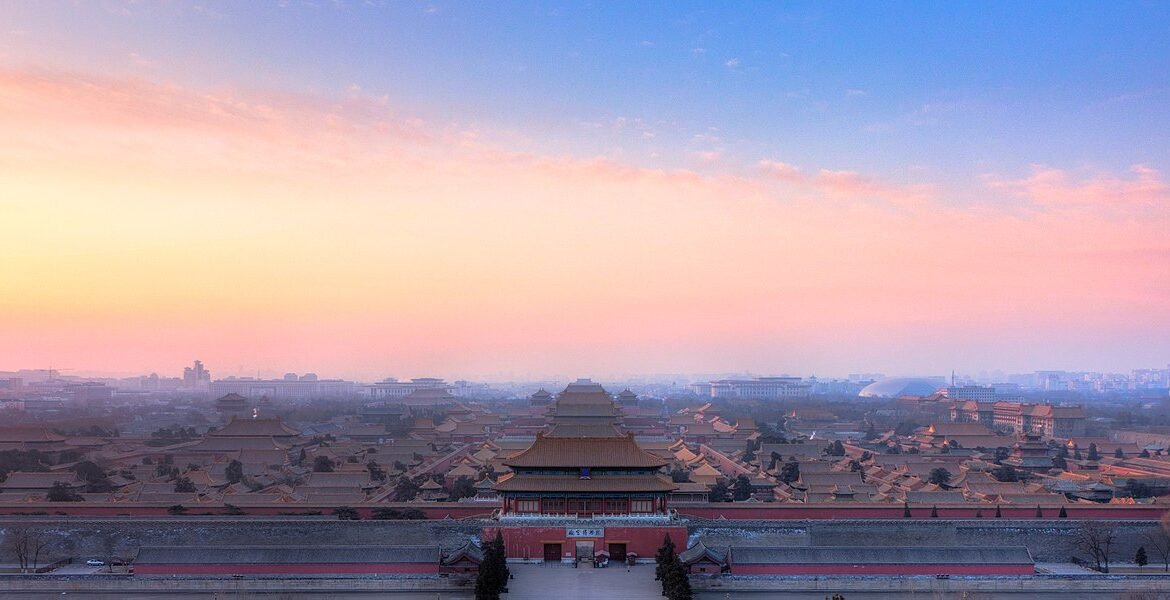 The layout and position of many Chinese cities are influenced by feng shui and the Forbidden City is undoubtedly a superb example. In our introduction, we uncover some of the hidden mysteries of this architectural marvel

The city of Beijing was constructed during the Ming dynasty between 1407 and 1420, when the third Ming Emperor, Yong Le, decided to move the political centre of China from Nanjing to the Northern location of Beijing.

His motivation was a need to be in a more dominant position against the increasing threats of the Mongols. The plan of Beijing was laid out in line with feng shui principles and the centre of the structure was to become the residence of the Emperor and, thus, became known as the Forbidden City.

Otherwise called the ‘purple forbidden city’, for nearly 500 years it was completely off limits to ordinary people. No one was allowed to enter the city without permission from the royal household, and the imposing city wall made it impossible to try to get in by any other means.

Construction of the City

Constructed on 72 hectares of land, the Forbidden City was built on a South-North axis in a spacious, symmetrical arrangement, and became an immense grandeur of palaces, pavilions, courtyards and gardens, encompassed by a city wall and moat. Thousands of workers were used to construct the city and raw materials were brought in from all over the country.

Most of the buildings in the city were built of wood and raised on a stone terrace. The palaces and gardens were ornately decorated and the feng shui was considered in the construction of every aspect of the city.

Despite the use of feng shui, the Forbidden City was plagued with problems. Unbeknown to Yong Le, when the first Ming Emperor, Chu Yuan Chuan overthrew the Mongols and came to power, he ordered that all feng shui masters be put to death and fake feng shui books be written and distributed throughout the land. The people came to rely on these books and believed them to be an accurate representation of the principles of feng shui.

When Yong Le, the third Ming Emperor started to build the Forbidden City, his architects and builders probably used them to arrange the feng shui of the new palaces. Shortly after the palaces had been constructed, they burnt down and it is believed that the inaccurate feng shui analysis based on these books may have been the cause.

When the Ching Dynasty overthrew the Ming Dynasty in the 16th century, they too succumbed to incorrect feng shui and it was not until the Emperor, Ch’ien Lung, took a personal interest in the feng shui of his residence that he succeeded in introducing correct feng shui practice to the city and so enjoyed a prosperous reign.

The Power of the Emperor

All the buildings in the Forbidden City were built so they are orientated to face South because it was considered auspicious for the Emperor. Buildings were also constructed to gain the maximum balance between yin and yang. For example, the Emperor resided in the Palace of Heavenly Purity which symbolises yang and the South, whereas the Empress lived in the Palace of Earthly Tranquillity which symbolises yin and the North.

The authority of the Emperor was further enhanced with the use of colour in the city. For example, some of the roofs of the imperial buildings were tiled with yellow tiles. The colour yellow is associated with power and Earth, and was used to symbolise the Emperor’s position at the centre of the empire. However, the Imperial Library roof used black tiles, the colour of the Water Element to protect the library archives from the potential threat of fire.

Many of the roofs have dragons, lions and other animals on the tips of the sloping roofs to symbolise protection and also to guard against fire. The dragon, is the symbol of Imperial power and can be found all over the Forbidden City. Pairs of lions, the symbol of protection, stand vigilantly on guard at the entrance to all of the main halls in the city.

The Forbidden City contains three great halls, the Hall of Supreme Harmony, the Hall of Perfect Harmony, and the Hall of Preserving Harmony, whose Chinese names originate from the I Ching, the Book of Changes. 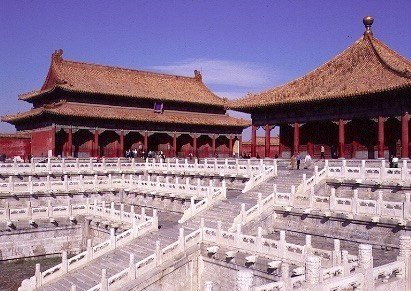 The most important hall is the Hall of Supreme Harmony decorated entirely in the very auspicious colours of red and gold. It is the biggest and most beautiful wooden structure in the Forbidden City. For hundreds of years during the Ming and Ching dynasties this was the tallest building in Beijing and by law no house could rise higher. Inside the Hall, the central columns are gilded and decorated with dragons while others are lacquered in red.

In Imperial times the floors would have been covered with rich yellow carpets. It was strongly believed, for the Emperor, the ‘Son of Heaven’ to govern effectively, it was crucial that he sat at the centre of the capital and faced his best Direction, to exert power and authority over his realm.

It was here in the Hall of Supreme Harmony on a raised platform, that he sat on his Dragon throne surrounded by symbols of longevity and power. All the major events of the empire were celebrated in this hall such as the enthronement of a new emperor and ceremonies marking the new lunar year.

The Hall of Complete Harmony and the Hall of Preserving Harmony were used for much less formal occasions. The entrance of many Imperial buildings was marked by an access ramp, in the form of a slab of sculpted white marble.

The Imperial Walkway is the largest of these, over 16 metres (54 feet) long, a single piece of marble, weighing more than 200 tons, ornately decorated showing the yang of the Dragon and the yin of the Phoenix.

It also represents water and wind in the form of clouds eternally descending the stairs. This walkway was used when the emperor was carried in his sedan chair. It is an excellent example of how feng shui is applied, seen repeatedly throughout the city.

The Forbidden City is truly an amazing place, a visual demonstration of how feng shui has been applied over the centuries. We have touched on just a few of the hidden stories of this magnificent city.

It deserves a much deeper analysis of how feng shui has been incorporated into its design and architecture and in a future issue we will endeavour to uncover many more of these mysteries.