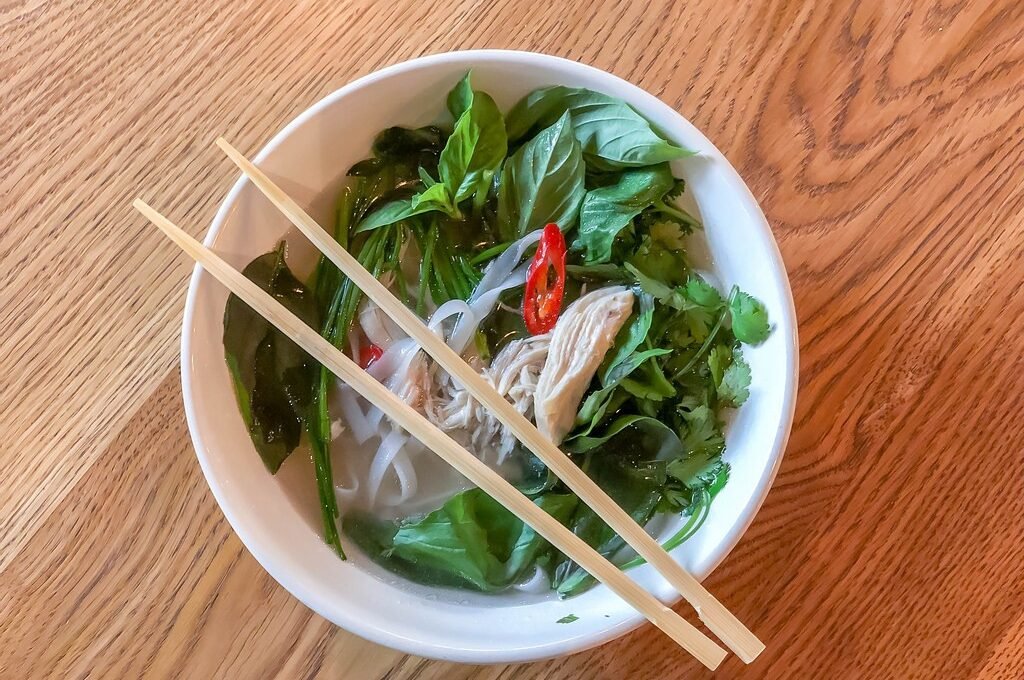 The quest for the perfect bowl of Vietnamese Chicken Soup took me around the World.  Little did I suspect I would find my Holy Grail in a London backyard Garden

It was cold, foggy and the wind was blowing through the Golden Gate – a typical San Francisco summer’s day – when I had my first bowl. It was Cork’s idea. I was going through a break-up of a marriage and felt as bad as the weather. The ex-prisoner of the Vietnamese, ex-photojournalist, ex-SEAL, took one look at me and figured this was the prescription I needed.

Going to a small place in new Chinatown, Cork shouted out something in Vietnamese and a few minutes later the owner came to our table, a man from Hanoi named Minh. In his hands was a large tray. He placed it down in front of us, made small talk with Cork and then left. Cork began the ritual. Into the bowl of steaming chicken soup, he placed freshly stripped leaves of Thai basil,
cilantro, bean sprouts and then a healthy sprinkle of sliced green chillies. He then squeezed the juice of a lime slice over it all.

He passed the bowl over to me. ‘Eat up buddy, it doesn’t get any better.’ He was right. The soup had subtle but intense flavours that danced across my tongue; it was healthy and even better, it was inexpensive. But more importantly, never before could I honestly say, a soup seemed to feed my soul.Nina Simonds is in a backyard in Golders Green, London, listening to this story. The chef and cookbook author starts laughing. ‘Vietnamese chicken soup,’ she says in her New England accent, ‘it’s the ultimate comfort food. No wonder you felt better.’

She thinks more about the soup, and then cooking in general.’What people seem to forget,’ says Nina, ‘is that the first recipe books weren’t made with a cook in mind but a doctor. Food was used to heal just as much as it was to feed but somewhere along the road, we’ve forgotten about the healing properties. ‘Nina is in England for a week promoting her latest book, A Spoonful of Ginger. In the US, book sales are already inching there way up to 100,000 copies. As much as Julia Child and James Beard were the names for the last century, Nina Simonds could very well be the cookbook chef for this new millennium.

Based on her own experiences and studies from living and travelling in China, Taiwan and South-
east Asia for numerous years, there are over 200 easily prepared recipes offered in A Spoonful. .. which not only taste wonderful, but also have specific healing properties based on traditional Chinese medicine. Primarily, with Nina, it’s all a question of balance; eating in harmony with the season, countering yin (cool foods – spinach, tomatoes, seafood) with yang (hot foods – ginger, garlic, hot peppers, beef) and neutralisers (rice and noodles).

Recipes are given to alleviate tiredness, the onset of a cold, period pains, cancer deterrents and many more health problems.Out of high school, Nina’s parents had visions of their girl going to
university. Her own vision for herself, instead of wearing a mortarboard, was to wear a chef’s hat.
Leaving university, she journeyed to Paris where she met Julia Child. Asking the guru of cooking where she should study, Nina was told Switzerland had the best schools.

She stayed a year but felt at the time it just didn’t seem to be what she was looking for. Taking advantage of the Mandarin she had learned in high school, Nina left next for Taipei, Taiwan. It was the fit she was after and she stayed there for over four years studying Chinese food, along with
language and culture.

Surprisingly, what made the greatest impression on her happened because of a severe stomach-ache. During her first few days in Taipei, she ate everything in sight, which left her with horrible pains. The doctor who examined Nina had been trained in both Chinese and Western medicine. After doing a Western examination, he asked her then what she had eaten in the last 24 hours. On a sheet of paper, he made two columns, one labelledyin, the other yang, and as she mentioned each food, he put it down in the appropriate column. He frowned when he could see the yin column was much larger than the yang.

He told her that yin foods were cooling to the body, while yang foods had a warming effects. Whenever there was an imbalance, negative conditions or illnesses were apt to develop. In Nina’s case, by eating more yang foods, the balance would be corrected. She did as instructed and
within 24 hours, the pains were gone.

Now in A Spoonful of Ginger, Nina’s two decade long study of yinlyang food comes together.
After that first bowl of Minh’s chicken soup, I became hooked, but thre was only one problem. I left San Francisco. Despite living and working in South-east Asia, I never could find any as good as Minh’s. During a brief visit to San Francisco, I told Minh my story of woe and he invited me to watch him make it. At the time, it seemed so simple and easy to remember.

I tried making it at home – now London – but it just didn’t taste the same. Obviously there was one key ingredient that Minh forgot to tell me or I just didn’t pick up on. My book shelves were beginning to overflow with cookbooks – all bought for this one recipe – but none came close … until now.

Thank you, Nina, and your recipe for Vietnamese chicken soup. The quest is over, the holy grail is found. Oh great gods of Vietnamese cooking, I offer this bowl up to you … it’s as good as it gets!