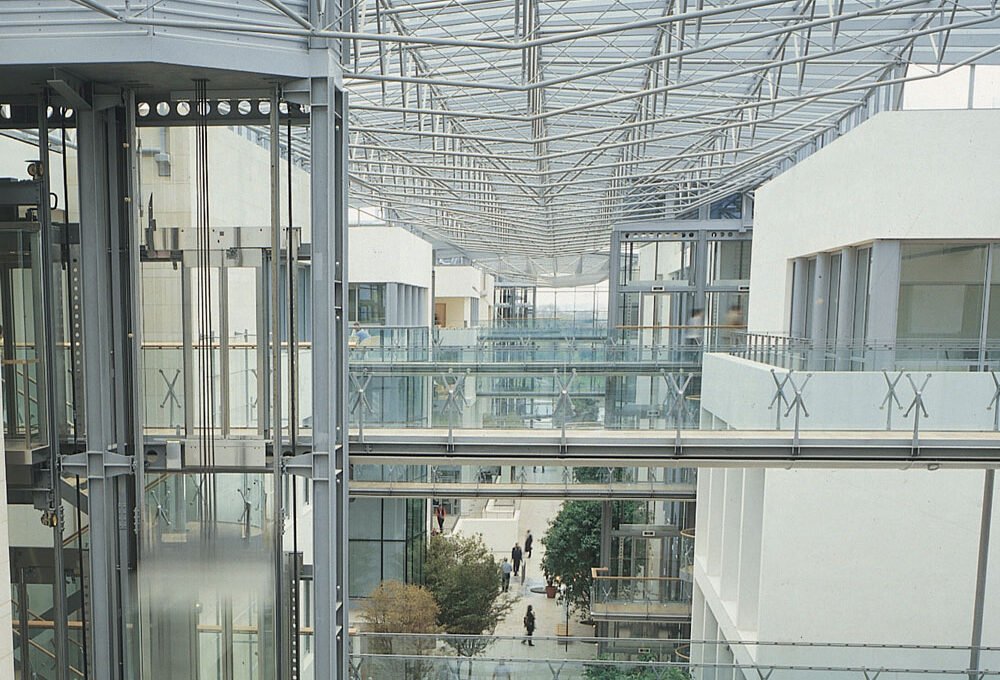 Big corporations constantly seek ways to retain their competitive edge and British Airways is no exception. Simon Brown shows us how their new Waterside building is a classic example of feng shui being used to advantage in business

Given the opportunity to build a new headquarters in parkland near Heathrow Airport, British Airways seized the chance to make a quantum leap forward and create a new working environment. The building would need to house nearly 3,000 employees and become a physical launch pad for business success well into the next century. The Waterside Building began construction in February 1996.

One of the main objectives of the corporation was to create a base from which employees
could team work using flexible workspaces and the latest communications technology.

To help achieve this, British Airways identified feng shui as a beneficial practice that could be incorporated into the design process.

Chris Byron, Project Director at Waterside, invited feng shui consultant Simon Brown to British Airways, to give a presentation to the architects, Niels Torp and Øyvind Neslein, and some members of staff. Chris became interested in feng shui after reading several articles on the subject. ‘I wanted to expose the architects to feng shui. They were cautious about using it in the design of the building and needed to find out more about it.’

The chief architects Niels Torp and Øyvind Neslein began the design of the building in a way that incorporated many fundamental feng shui principles. They created the idea of building 12 separate houses connected by a main ‘street’ so that every area received plenty of natural light as well as beautiful views of the parkland.

The ‘street’, a wide pedestrian walkway covered by a glass roof, is the focal point where employees and visitors gravitate, meet and eat. Containing cafes, restaurants, a bank, shops, meeting rooms, a library and main reception area, it connects the 12 main office spaces. All this is surrounded by serene parkland with lakes, trees and paths.

Simon was very excited about the project. ‘British Airways was the largest and best-known company I had worked with, and this was the biggest project I had been employed on.
‘Although I thought of British Airways as a more established, conservative company that would be cautious about embracing something like feng shui, I was impressed at how forward thinking and progressive the company was. At this stage the foundations had already been laid and the main structure of the building was in the process of being built. We therefore concentrated on the interior design of the new building.’

Once Simon had completed his research, he was able to make suggestions on the use of colours, plants, materials, shapes, furniture and seating arrangements – all of which have been incorporated into the design of the building. Each of the various offices were coloured in such a way to create a mood based on the task being carried out in that particular office.’

Chris Byron, who has applied feng shui to his home, commented, ‘The Waterside building has been overwhelmingly accepted by the staff. It has achieved an amazing result. Staff performance has improved, they feel motivated and valued. Some of the staff are very intrigued by feng shui and want to apply it to their own homes.’ Now the building is complete, Simon firmly believes that this will be a much happier place to work.

“Staff performance has improved, they feel motivated and valued. Some of the staff are very intrigued by feng shui and want to apply it to their own homes.”

As Waterside is surrounded by parkland there are no busy roads pointing towards the building. This prevents the building from having fast-flowing ch’i energy, known as cutting ch’i, directed at it, reducing the feelings of stress and helping to reduce the risk of poor health and high staff turnover. There are no corners of other buildings pointing at the Waterside building and this also avoids cutting Ch’i being directed at the people within the offices.

Waterside is also fortunate that it is not in the shadow of any other taller building. The whole area has good exposure to natural light from various angles, and is therefore charged by different kinds of ch’i energy generated by the sun as it moves through the sky.

Historically, fresh, unpolluted water has been thought to have therapeutic and healing qualities. It also has a special capacity to affect the flow of ch’i and therefore to make it easier to achieve good health. The opposite is also true and if you are surrounded by polluted or stagnant water it can adversely affect your well-being.   The Waterside building is close to a lake and has a water feature at the end of the ‘street’. The

ake helps generate a healthy flow of ch’i energy close to the building, whilst the water feature will help keep the air clean and create a more refreshing atmosphere.

The high glass roof gives the ‘street’ the feeling of being outside. The atmosphere here is open, big and spacious; an ideal contrast to the more busy work spaces. It provides the opportunity to have a change of environment simply by conducting a meeting in the rooms on the ‘street’.

The considerable exposure to sunlight makes it easier for ch’i energy to enter the ‘street’ creating a situation where the ch’i energy circulates more quickly and changes more often. The result is that spending time in the ‘street’ or using its facilities – such as the meeting rooms, plaza, espresso bar or cafe – is very invigorating and helps re-energise peoples’ minds.

The new offices, located in the ‘houses’ off the ‘street’, have been designed with windows that provide plenty of natural light. Apart from being less of a strain to the eye, this promotes good circulation of ch’i energy and reduces the risk of ch’i stagnating.

“British Airways was the largest and best known company I had worked with, and this was the biggest project I had been employed on”

The open-plan design makes it easier to give everyone good exposure to natural light. In this arrangement ch’i energy can flow easily, helping to create a lively space to work in. It is a layout that greatly reduces the risk of a stuffy atmosphere in which it seems difficult to get things done.
The flexible work cells within the offices have been designed to maximise the ability to create natural teams that can work well together. The aim has been to help people achieve as much as possible, while maintaining harmonious relationships with each other. The flexibility of the workstations allows users to turn to face their colleagues and to also face a favourable personal Direction when working on parts of a project by themselves.

Simon Brown is a feng shui consultant who also runs courses on feng shui. His clients include British Airways, The Body Shop and Boy George. He is the author of The Principles of Feng Shui and Practical Feng Shui. His new book Practical Feng Shui for Business will be published by Ward Lock